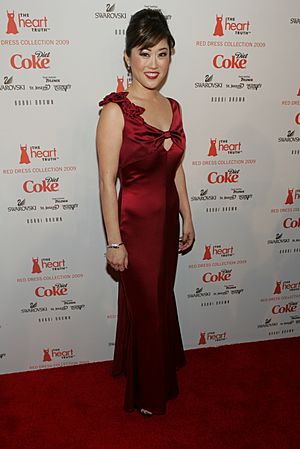 Kristi Yamaguchi (July 1971- now) was an amazing figure skater. She was the first Asian American to win an Olympic gold figure skating medal. Her skills and perseverance have inspired many people.

Yamaguchi was born with a bad foot condition. She had to wear casts on her legs when she was little. Her mother said this could be why she is such a hardworking person. She was inspired by Olympic gold medalist, Dorothy Hamill, among other famous figure skaters. She started figure skating at a young age and worked very hard through her teenage years to pursue her dreams.

When she was 20, Yamaguchi won an Olympic gold medal. She also won many other awards and is even in the US figure skating Hall of Fame.

After she retired from skating she continued to inspire and prove herself to the world. She wrote many books, like: Figure skating for Dummies, Always Dream, and Dream Big, Little Pig. These books are about figure skating and dreaming big. Yamaguchi started the “Always Dream Foundation” to help kids pursue their dreams. She is also a mother of 2 kids and continues to figure skate for fun.

All content from Kiddle encyclopedia articles (including the article images and facts) can be freely used under Attribution-ShareAlike license, unless stated otherwise. Cite this article:
Kristi Yamaguchi Facts for Kids. Kiddle Encyclopedia.