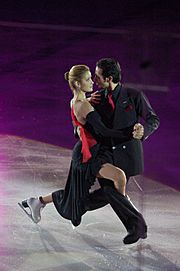 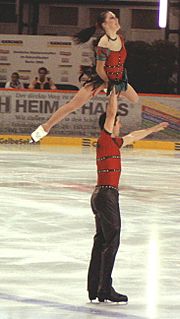 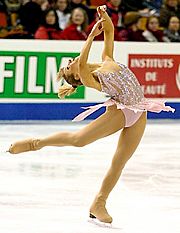 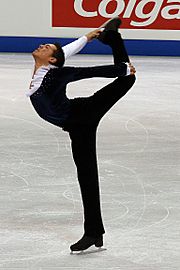 Figure skating is both an art and a sport, in which people skate around on ice, doing jumps and spins. It is done at the Winter Olympics, and it has its own world championships. The name means to make figures or patterns on the ice. People skate with music.

In figure skating, sometimes women or men skate alone, or they skate in couples. Couples dancing includes pairs and ice dancing. Pairs skating has jumps, and sometimes the man lifts the woman in the air. These things are not done in ice dancing. In ice dancing, the woman must be held in the man's arms. Another kind of figure skating is synchronized skating done in groups.

Singles skating is composed of a Short Program and a Free Skate. Both of them have a technical score and a presentation score.

Under the ISU Judging System the Judges focus entirely on evaluating the quality of each element performed (technical aspect) and the quality of the performance. There will be a panel of 9 Judges per segment. Out of these 9 scores, the highest and lowest score of each element or program component are ignored and the average will be taken. 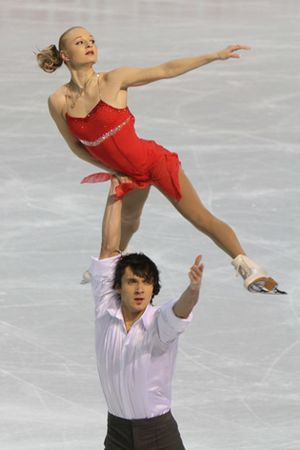 A one arm overhead lift in pair skating 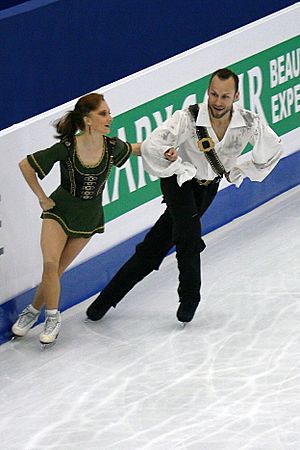 The score for the element is composed of a “Base Value” of each element and the “Grade of Execution - GOE”. GOE is that the Judge grades the quality of the element on a scale of +3, +2, +1, 0, -1, -2, -3. The total of all the elements scores gives the Technical Score.

Over all skating quality

The varied and/or intricate footwork, positions, movements, and holds that link all elements. This also includes the entrances and exits of technical elements.

The arrangement of all movements according to the principles of proportion, space and music

The translation of the music to movement on ice 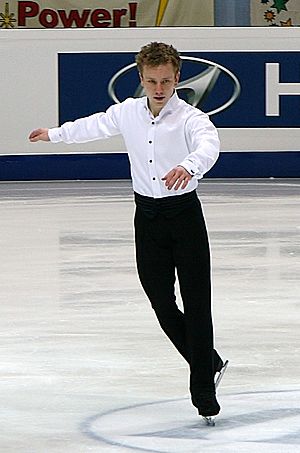 Ross Miner sets up for a jump.

There are six types of jump that ISU decides to score. The following items are listed in order of the score (difficulty). There are two types of jumps: edge jump and toe jump. The Axel, loop, and Salchow are edge jumps and the lutz, flip and toe loop are toe jumps.

This is the only jump where a skater takes off while skating forward. It's the most difficult jump of the six.

The skater takes off from the back outside edge of the left or right foot and pokes the ice with the opposite toe.

The skater takes off from the back inside edge of the left or right foot and pokes the ice with the opposite toe.

The skater takes off from the back outside edge of the right or left foot. This jump is often used in second jump of combination jump.

The skater takes off from the back inside edge of the right or left foot.

The skater takes off from the back outside edge of the right or left foot and pokes the ice with the opposite toe. This is the easiest jump and it is often used in second jump of combination jump. 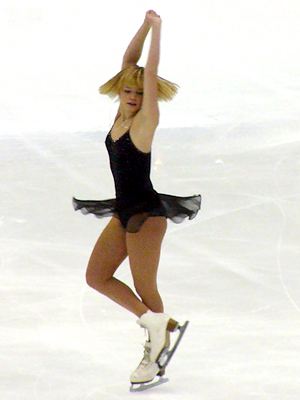 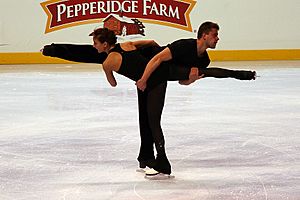 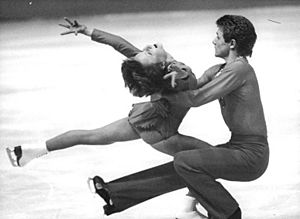 Pair spin with lady in layback and man in sit spin

Spins are classified as Sit spins, Upright spins or Camel spin. Each of them has various variations. Any position which is not basic is a non-basic position.

The position of this spin is that the upper part of the skating leg is at least parallel to the ice.

The position of this spin is any position with the skating leg is extended or slightly bent which is not a camel position.

The position of this spin is any position where the free leg backwards and the knee is higher than the hip level, however Layback, Biellmann and similar variations are still considered upright spins.

Turns must be executed on one foot. If a turn is “jumped ”, it is not counted as performed.

Steps must be executed on one foot whenever possible.

All content from Kiddle encyclopedia articles (including the article images and facts) can be freely used under Attribution-ShareAlike license, unless stated otherwise. Cite this article:
Figure skating Facts for Kids. Kiddle Encyclopedia.