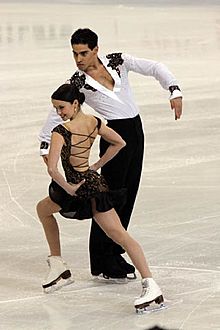 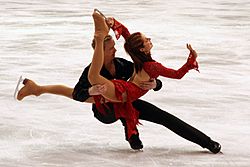 Ice dancing is a form of figure skating related to ballroom dancing. Its first competition was at the World Figure Skating Championships in 1952, but it did not become a Winter Olympic Games medal sport until 1976. As in pair skating, dancers compete as a couple, a man and a woman.

Ice dancing is different from pair skating because it limits the figures to those which are imitative of dance. Skaters must stay close together, and may not perform jumps. There are set dances, in which the style must be appropriate for the type of dance, and there is a Free Dance section which allows lifts up to shoulder level.

Ice dancing is the only form of figure skating to allow vocal music in official competitions.

All content from Kiddle encyclopedia articles (including the article images and facts) can be freely used under Attribution-ShareAlike license, unless stated otherwise. Cite this article:
Ice dancing Facts for Kids. Kiddle Encyclopedia.