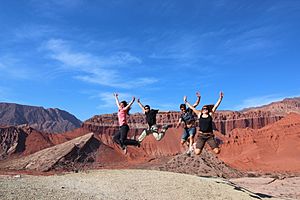 Jumping is a form of movement in which an organism propels itself through the air along a ballistic trajectory. Jumping can be distinguished from running, galloping and other gaits in which the entire body is temporarily airborne by the relatively long duration.

Some animals, such as the kangaroo, employ jumping as their primary form of locomotion, while others, such as frogs, use it only as a means to escape predators. Jumping is also a key feature of various activities and sports, including the long jump, high jump, and show jumping.

One way to classify jumping is by the manner of foot transfer. In this classification system, five basic jumping forms are distinguished:

All content from Kiddle encyclopedia articles (including the article images and facts) can be freely used under Attribution-ShareAlike license, unless stated otherwise. Cite this article:
Jumping Facts for Kids. Kiddle Encyclopedia.