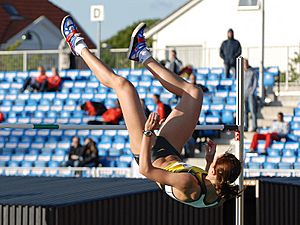 The high jump is a track and field athletics event. Without the aid of any devices, athletes jump over a horizontal bar placed at measured heights. The high jump was first practised in England in the 19th century. It became an Olympic sport in 1896 for men and in 1928 for women. The rules that were made in 1865 still exist today. Thus, every athlete has three attempts on every height. The athletes are allowed to touch the bar but they must not knock it down.

The women's world record of 2.09 metres is held by Stefka Kostadinova. It was set in 1987.

There is a technique called the Fosbury flop and scissor kick. 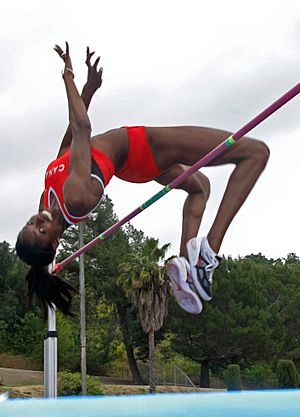 The rules for the high jump are set internationally by the International Association of Athletics Federations (IAAF). Jumpers must take off on one foot. A jump is considered a failure if the bar is dislodged by the action of the jumper whilst jumping or the jumper touches the ground or breaks the plane of the near edge of the bar before clearance. The technique one uses for the jump must be almost flawless in order to have a chance of clearing a high bar.

Competitors may begin jumping at any height announced by the chief judge, or may pass, at their own discretion. Most competitions state that three consecutive missed jumps, at any height or combination of heights, will eliminate the jumper from competition.

If the event remains tied for first place (or a limited advancement position to a subsequent meet), the jumpers have a jump-off, beginning at the next greater height. Each jumper has one attempt. The bar is then alternately lowered and raised until only one jumper succeeds at a given height. 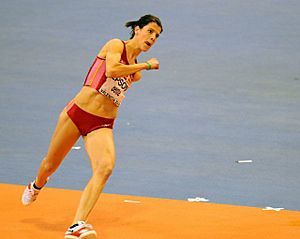 Spanish jumper Ruth Beitia approaching the bar from an angle

The approach run of the high jump may actually be more important than the take-off. If a high jumper runs with bad timing or without enough aggression, clearing a high bar becomes more of a challenge. The approach requires a certain shape or curve, the right amount of speed, and the correct number of strides. The approach angle is also critical for optimal height.

Most great straddle jumpers have a run at angles of about 30 to 40 degrees. The length of the run is determined by the speed of the person's approach. A slower run requires about 8 strides. However, a faster high jumper might need about 13 strides. A greater run speed allows a greater part of the body's forward momentum to be converted upward.

The J type approach, favored by Fosbury floppers, allows for horizontal speed, the ability to turn in the air (centripetal force), and good take-off position. This allows for horizontal momentum to turn into vertical momentum, propelling the jumper off the ground and over the bar. The approach should be a hard controlled stride so that a person does not fall from creating an angle with speed. Athletes should run tall and lean on the curve, from the ankles and not the hips. This allows the correct angle to force their hips to rotate during take-off, which allows their center of gravity to pass under the bar.

Unlike the classic straddle technique, where the take-off foot is "planted" in the same spot at every height, flop-style jumpers must adjust their take-off as the bar is raised. Their approach run must be adjusted slightly so that their take-off spot is slightly further out from the bar in order to allow their hips to clear the bar while still maintaining enough momentum to carry their legs across the bar. Jumpers attempting to reach record heights commonly fail when most of their energy is directed into the vertical effort, and they brush the bar off the standards with the backs of their legs as they stall out in mid-air.

An effective approach shape can be derived from physics. For example, the rate of backward spin required as the jumper crosses the bar to facilitate shoulder clearance on the way up and foot clearance on the way down can be determined by computer simulation. This rotation rate can be back-calculated to determine the required angle of lean away from the bar at plant, based on how long the jumper is on the take-off foot. This information, together with the jumper's speed in the curve, can be used to calculate the radius of the curved part of the approach. This is a lot of work and requires measurements of running speed and time of take-off foot on the ground. However, one can work in the opposite direction by assuming an approach radius and watching the resulting backward rotation. This only works if some basic rules are followed in how one executes the approach and take-off.

Drills can be practiced to solidify the approach. One drill is to run in a straight line (the linear part of the approach) and then run two to three circles spiraling into one another. Another is to run or skip a circle of any size, two to three times in a row. It is important to train to leap upwards without first leaning into the bar, allowing the momentum of the J approach to carry the body across the bar.

In competition the winner is the person who cleared the highest height. In case of a tie, fewer failed attempts at that height are better: i.e., the jumper who makes a height on his or her first attempt is placed ahead of someone who clears the same height on the second or third attempt. If there still is a tie, all the failed attempts at lower heights are added up, and the one with the fewest total misses is declared the winner. If still tied, a playoff is held. Starting height is the next higher height after the overjumped one. If all the competitors clear the height, the bar is raised 2 cm (0.79 in), and if they fail, the bar is lowered 2 cm. That continues until only one competitor succeeds in overjumping that height, and he or she is declared the winner.

All content from Kiddle encyclopedia articles (including the article images and facts) can be freely used under Attribution-ShareAlike license, unless stated otherwise. Cite this article:
High jump Facts for Kids. Kiddle Encyclopedia.