Pole vault is a track and field event in which a person uses a long, flexible stick (which today is usually made either of fiberglass or carbon fiber) as an aid to leap over a bar. Pole jumping competitions were known to the ancient Greeks, as well as the Cretans and Celts. It has been a full medal event at the Olympics since the Summer Olympics at 1896 for men and 2000 for women. It started in the ancient Greece.

Competitive pole vaulting began using solid ash poles. As the heights attained increased, the bamboo poles gave way to tubular aluminum, which was tapered at each end. Today's pole vaulters benefit from poles produced by wrapping pre-cut sheets of fiberglass that contains resin around a metal pole mandrel, to produce a slightly curved pole that bends more easily under the compression caused by an athlete's take-off. The shape of the fiberglass sheets and the amount of fiberglass used is carefully planned to provide the desired length and stiffness of pole. Different fiber types, including carbon-fiber, are used to give poles specific characteristics intended to promote higher jumps. In recent years, carbon fiber has been added to the commonly used E-glass and S-glass materials to create a lighter pole.

As in the high jump, the landing area was originally a heap of sawdust or sand where athletes landed on their feet. As technology enabled higher vaults, mats evolved into bags of large chunks of foam. Today's high-tech mats are foam usually 1–1.5 meters (3 ft 3 in–4 ft 11 in) thick. Mats are growing larger in area as well to minimize risk of injury. Proper landing technique is on the back or shoulders. Landing on the feet should be avoided, to eliminate the risk of injury to the lower extremities, particularly ankle sprains.

Rule changes over the years have resulted in larger landing areas and additional padding of all hard and unyielding surfaces.

The pole vault crossbar has evolved from a triangular aluminum bar to a round fiberglass bar with rubber ends. This is balanced on standards and can be knocked off when it is hit by a pole vaulter or the pole. Rule changes have led to shorter pegs and crossbar ends that are semi-circular. 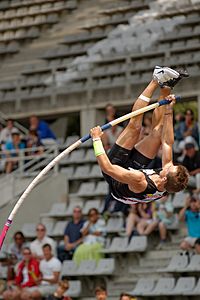 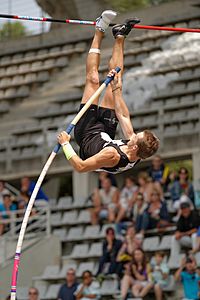 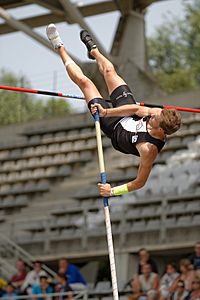 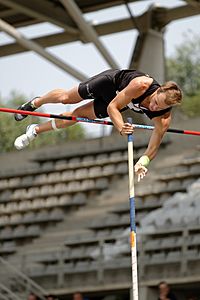 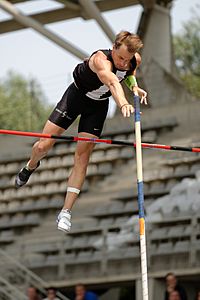 Although many techniques are used by vaulters at various skill levels to clear the bar, the generally accepted technical model can be broken down into several phases:

During the approach the pole vaulter sprints down the runway in such a way as to achieve maximum speed and correct position to initiate takeoff at the end of the approach. Top class vaulters use approaches with 18 to 22 strides, often referred to as a "step" in which every other foot is counted as one step. The run-up to the vaulting pit begins forcefully with the vaulter running powerfully in a relaxed, upright position with knees lifted and torso leaning very slightly forward. The head, shoulders and hips are aligned, the vaulter increasing speed as the body becomes erect. The tip of the vaulting pole is angled higher than eye level until three paces from takeoff, when the pole tip descends efficiently, amplifying run speed as the pole is planted into the vault box. The faster the vaulter can run and the more efficient their take-off is, the greater the kinetic energy that can be achieved and used during the vault.

The plant and take off is initiated typically three steps out from the final step. Vaulters will usually count their steps backwards from their starting point to the box only counting the steps taken on the left foot (vice versa for left-handers) except for the second step from the box, which is taken by the right foot. For example; a vaulter on a "ten count" (referring to the number of counted steps from the starting point to the box) would count backwards from ten, only counting the steps taken with the left foot, until the last three steps taken and both feet are counted as three, two, one. These last three steps are normally quicker than the previous strides and are referred to as the "turn-over". The goal of this phase is to efficiently translate the kinetic energy accumulated from the approach into potential energy stored by the elasticity of the pole, and to gain as much initial vertical height as possible by jumping off the ground. The plant starts with the vaulter raising their arms up from around the hips or mid-torso until they are fully outstretched above the head, with the right arm extended directly above the head and the left arm extended perpendicular to the pole (vice versa for left-handed vaulters). At the same time, the vaulter is dropping the pole tip into the box. On the final step, the vaulter jumps off the trail leg which should always remain straight and then drives the front knee forward. As the pole slides into the back of the box the pole begins to bend and the vaulter continues up and forward, leaving the trail leg angled down and behind.

The swing and row simply consists of the vaulter swinging the trail leg forward and rowing the pole, bringing the top arm down to the hips, while trying to keep the trail leg straight to store more potential energy into the pole, the rowing motion also keeps the pole bent for a longer period of time for the vaulter to get into optimum position. Once in a "U" shape the left arm hugs the pole tight to efficiently use the recoil within the pole. The goal is to carry out these motions as thoroughly and as quickly as possible; it is a race against the unbending of the pole. Effectively, this causes a double pendulum motion, with the top of the pole moving forward and pivoting from the box, while the vaulter acts as a second pendulum pivoting from the right hand. This action gives the vaulter the best position possible to be "ejected" off the pole. The swing continues until the hips are above the head and the arms are pulling the pole close to the chest; from there the vaulter shoots their legs up over the cross bar while keeping the pole close.

The extension refers to the extension of the hips upward with outstretched legs as the shoulders drive down, causing the vaulter to be positioned upside down. This position is often referred to as "inversion". While this phase is executed, the pole begins to recoil, propelling the vaulter quickly upward. The hands of the vaulter remain close to the body as they move from the shins back to the region around the hips and upper torso.

This is often highly emphasized by spectators and novice vaulters, but it is the easiest phase of the vault and is a result of proper execution of previous phases. This phase mainly consists of the vaulter pushing off the pole and releasing it so it falls away from the bar and mats. As the torso goes over and around the bar, the vaulter is facing the bar. Rotation of the body over the bar occurs naturally, and the vaulter's main concern is making sure that their arms, face and any other appendages do not knock the bar off as they go over. The vaulter should land near the middle of the foam landing mats, or pits, face up.

All content from Kiddle encyclopedia articles (including the article images and facts) can be freely used under Attribution-ShareAlike license, unless stated otherwise. Cite this article:
Pole vault Facts for Kids. Kiddle Encyclopedia.