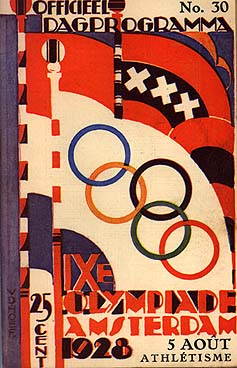 The 1928 Summer Olympics, officially known as the Games of the IX Olympiad, were held at Amsterdam in the Netherlands.

The games were thought to be a success. Half of the expense of the games was covered by the Dutch government.

A total of 46 nations sent athletes to compete at the Amsterdam games.

Countries at the 1928 Olympics

All content from Kiddle encyclopedia articles (including the article images and facts) can be freely used under Attribution-ShareAlike license, unless stated otherwise. Cite this article:
1928 Summer Olympics Facts for Kids. Kiddle Encyclopedia.