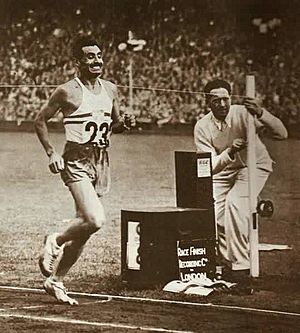 The 1948 Summer Olympics, officially known as the Games of the XIV Olympiad, were held at London in the United Kingdom.

In part, the games were thought to be a success because the Organizing Committee did not go into debt. The final financial report showed a ₤29,000 profit.

A total of 59 nations sent athletes to compete at the London Games. <div style="-moz-column-count:

Countries at the 1948 Olympics

All content from Kiddle encyclopedia articles (including the article images and facts) can be freely used under Attribution-ShareAlike license, unless stated otherwise. Cite this article:
1948 Summer Olympics Facts for Kids. Kiddle Encyclopedia.