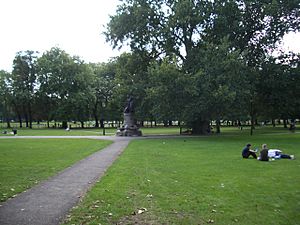 Clapham is a district of south-west London lying mostly within the London Borough of Lambeth but with some areas (most notably Clapham Common) stretching out into the neighbouring London Borough of Wandsworth.

The present day Clapham High Street is an ancient "diversion" of the Roman military road Stane Street, which ran from London to Chichester. This followed the line of Clapham Road and then onward along the line of Abbeville Road. The ancient status of that military road is recorded on a Roman stone now placed by the entrance of the former Clapham Library in the Old Town, which was discovered during building operations at Clapham Common South Side in 1912. Erected by Vitus Ticinius Ascanius according to its inscription, it is estimated to date from the 1st century.

According to the history of the Clapham family, maintained by the College of Heralds, in 965 King Edgar of England gave a grant of land at Clapham to Jonas, son of the Duke of Lorraine, and Jonas was thenceforth known as Jonas "de [of] Clapham". The family remained in possession of the land until Jonas's great-great grandson Arthur sided against William the Conqueror during the Norman invasion of 1066 and, losing the land, fled to the north (where the Clapham family remained thereafter, primarily in Yorkshire).

Clapham appears in Domesday Book as Clopeham. It was held by Goisfrid (Geoffrey) de Mandeville and its domesday assets were 3 hides; 6 ploughs, 5 acres (20,000 m2) of meadow. It rendered £7 10s 0d, and was located in Brixton hundred.

The parish comprised 4.99 square kilometres (1.93 sq mi). The benefice remains to this day a rectory and in the 19th century was in the patronage of the Atkins family: the tithes were commuted for £488. 14. in the early 19th century and so the remaining glebe comprised only 11 acres in 1848. The church, which belonged to Merton Priory was, with the exception of the north aisle, which was left standing for the performance of the burial service, taken down under an act of parliament in 1774, and a new church erected in the following year at an expense of £11,000 (equivalent to £1,063,770 in 2018), on the north side of the common.

Clapham in the 17th-19th century

In the late 17th century, large country houses began to be built there, and throughout the 18th and early 19th century it was favoured by the wealthier merchant classes of the City of London, who built many large and gracious houses and villas around Clapham Common and in the Old Town. Samuel Pepys spent the last two years of his life in Clapham, living with his friend, protégé at the Admiralty and former servant William Hewer, until his death in 1703.

Clapham Common was also home to Elizabeth Cook, the widow of Captain James Cook the explorer. She lived in a house on the common for many years following the death of her husband. Other notable residents of Clapham Common include Palace of Westminster architect Sir Charles Barry, Norwegian composer Edvard Grieg and 20th century novelist Graham Greene. John Francis Bentley, architect of Westminster Cathedral, lived in the adjacent Old Town.

In the late 18th and early 19th centuries, the Clapham Sect were a group of upper class (mostly evangelical Anglican) social reformers who lived around the Common. They included William Wilberforce, Henry Thornton and Zachary Macaulay, father of the historian Thomas Macaulay, as well as William Smith, M.P., the Dissenter and Unitarian. They were very prominent in campaigns for the abolition of slavery and child labour, and for prison reform. They also promoted missionary activities in Britain's colonies. The Society for Missions to Africa and the East (as the Church Mission Society was first called) was founded on 12 April 1799 at a meeting of the Eclectic Society, supported by members of the Clapham Sect, who met under the guidance of John Venn (1759–1813), the Rector of Clapham. By contrast, an opponent of Wilberforce, merchant and slave-trader George Hibbert also lived at Clapham Common, worshipping in the same church, Holy Trinity.

Clapham in the 20th and 21st centuries

After the coming of the railways, Clapham developed as a suburb for commuters into central London, and by 1900 it had fallen from favour with the upper classes. Many of their grand houses had been demolished by the middle of the 20th century, though a number remain around the Common and in the Old Town, as do a substantial number of fine late 18th- and early 19th-century houses. Today's Clapham is an area of varied housing, from the large Queen Anne, Regency and Georgian era homes of the Old Town and Clapham Common, to the grids of Victorian housing in the Abbeville area. As in much of London, the area also has its fair share of council-owned social housing on estates dating from the 1930s and 1960s.

In the early 20th century, Clapham was seen as an ordinary commuter suburb, often cited as representing ordinary people: hence the familiar "man on the Clapham omnibus". By the 1980s, the area had undergone a further transformation, becoming the centre for the gentrification of most of the surrounding area. Clapham's relative proximity to traditionally expensive areas of central London, which had become increasingly unaffordable to all but the wealthy during the course of the 1980s and 1990s, led to an increase in the number of middle-class people living in Clapham. Today the area is generally an affluent place, although its professional residents often live relatively close to significant pockets of social housing.

Commuter woes on Southern had been mentioned in the London Evening Standard, "Southern rail suggests commuter goes on 100 mile detour to Clapham instead of her normal six minute journey". 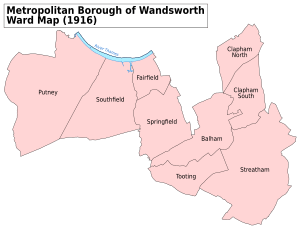 A map showing the Clapham wards of Wandsworth Metropolitan Borough as it appeared in 1916.

Clapham was an ancient parish in the county of Surrey. For poor law purposes the parish became part of the Wandsworth and Clapham Union in 1836. The parish was added to the Registrar General London Metropolis area in 1844 and consequently it came within the area of responsibility of the Metropolitan Board of Works in 1855. The population of 16,290 in 1851 was considered too small for the Clapham vestry to be a viable sanitary authority and the parish was grouped into the Wandsworth District, electing 18 members to the Wandsworth District Board of Works. In 1889 the parish was transferred to the County of London and in 1900 it became part of the new Metropolitan Borough of Wandsworth. It was abolished as a civil parish in 1904, becoming part of the single Wandsworth Borough parish for poor law. The former Metropolitan Borough of Wandsworth was divided in 1965 and the area of the historic parish of Clapham was transferred to the London Borough of Lambeth.

Translated to the postal system, Clapham fills most of SW4 and as defined, at least since the Norman Conquest until 1885, includes parts of SW8, SW9 and SW12, London. Clapham Common is shared with the London Borough of Wandsworth (the border between the two boroughs runs across the common), but Lambeth has responsibility for its management. According to the 2011 census, the Clapham Area has a population of 40,850 inhabitants. For administrative and electoral purposes, Clapham is made up of three Lambeth wards: Clapham Common, Clapham Town and Thornton ward. Parts of Clapham North lie within the Brixton electoral ward of Ferndale and the Stockwell electoral ward of Larkhall. The portion of the SW4 postcode north of Union Road and Stockwell Station falls within the area of Stockwell.

Much of southern Battersea is often incorrectly referred to as Clapham, because of the misnomer of 'Clapham Junction' railway station, and to stress Battersea's proximity to Clapham Common, as well as their relative distance from Battersea's historic nucleus. The railway station now known as Clapham Junction was originally named Battersea Junction by its architect to reflect its actual geographical location.

According to the 2011 census, White British is the largest ethnic group, at 51% of the population, followed by 16% Other White. 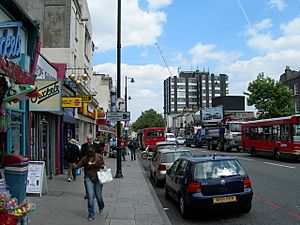 Clapham Common comprises 220 acres of green space, criss-crossed by footpaths, with three ponds, a Victorian bandstand and a large number of mature trees, including horse chestnuts and a significant avenue of London plane trees along Long Road. It is overlooked by a variety of buildings, including a number of Georgian and Victorian mansions. It also has Holy Trinity Clapham, an 18th-century Georgian church, important in the history of the evangelical Clapham Sect. Clapham Old Town is a small, affluent area to the north-east of the common, with a mix of architecture including some Georgian, Victorian and Queen Anne. Clapham Town comprises Clapham High Street and residential streets including Clapham Manor Street, home to Clapham Leisure Centre, as well as Venn Street with a cinema, restaurants, and a food market held every weekend throughout the year.

The neighbourhood, where used, derives its name from a tube station — it has no fixed boundary from the rest of Clapham. Taking any definition in informal use, it is predominantly mid-rise and low-rise residential land, and usually takes in major parts of the Common. Where regard to historic Clapham parish and some street signs is had, this area includes a detached part: the land bounded by Nightingale Square, Oldridge Road and Balham Hill.

Clapham North lies on either side of Clapham Road and borders the relatively modern creation 'Stockwell' in the historic Lambeth parish on Union Road and Stirling Road. There is a 'Stockwell Town' Partnership sign north of Union Road demarcating the boundary between Clapham and Stockwell. The northern part of Clapham in the Larkhall ward includes the Sibella conservation area. The southern part is Ferndale ward and includes Landor, Ferndale and Bedford roads leading up to Brixton.

As well as an extensive bus network, which connects the area with much of south and central London, Clapham has three tube stations and two railway stations.

There are two railway stations in the district on London Overground's East London Line:

In 2012, the Overground East London Line was extended to Clapham High Street and Wandsworth Road stations. This links Clapham directly to stations including Shepherds Bush, Canary Wharf, Shoreditch and Highbury and Islington.

All content from Kiddle encyclopedia articles (including the article images and facts) can be freely used under Attribution-ShareAlike license, unless stated otherwise. Cite this article:
Clapham Facts for Kids. Kiddle Encyclopedia.