Shoreditch is an inner city district in the historic East End of London and modern Central London within the London Borough of Hackney, lying immediately to the north of the City of London.

The districts of Hoxton and Haggerston are part of Shoreditch, but the Shoreditch High Street railway station, lies just outside, in the Bethnal Green area of Tower Hamlets.

The etymology of "Shoreditch" is debated. One legend holds that the place was originally named "Shore's Ditch", after Jane Shore, the mistress of Edward IV, who is supposed to have died or been buried in a ditch in the area. This legend is commemorated today by a large painting, at Haggerston Branch Library, of Jane Shore being retrieved from the ditch, and by a design on glazed tiles in a shop in Shoreditch High Street showing her meeting Edward IV.

However, the area was known as "Soersditch" long before Jane Shore's life. A more plausible origin for the name is "Sewer Ditch", in reference to a drain or watercourse in what was once a boggy area. It may have referred to the headwaters of the river Walbrook, which rose in the Curtain Road area.

In a further theory, antiquarian John Weever claimed that the name derived from Sir John de Soerdich, who was lord of the manor during the reign of Edward III (1327–77). 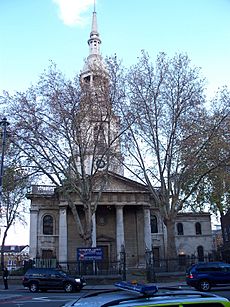 Though now part of Inner London, Shoreditch was previously an extramural suburb of the City of London, centred on Shoreditch Church at the crossroads where Shoreditch High Street and Kingsland Road are crossed by Old Street and Hackney Road.

Shoreditch High Street and Kingsland road are a small sector of the Roman Ermine Street and modern A10. Known also as the Old North Road, it was a major coaching route to the north, exiting the City at Bishopsgate. The east–west course of Old Street–Hackney Road was also probably originally a Roman Road, connecting Silchester with Colchester, bypassing the City of London to the south.

Shoreditch Church (dedicated to St Leonard) is of ancient origin and features in the famous line "when I grow rich say the bells of Shoreditch", from the nursery rhyme Oranges and Lemons.

Shoreditch was the site of a house of canonesses, the Augustinian Holywell Priory (named after a Holy Well on the site), from the 12th century until its dissolution in 1539. This priory was located between Shoreditch High Street and Curtain Road to east and west and Batemans Row and Holywell Lane to north and south. Nothing remains of it today. 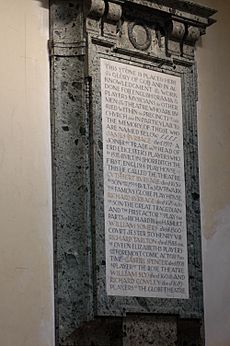 In 1576 James Burbage built the first playhouse in England, known as "The Theatre", on the site of the Priory (commemorated today by a plaque on Curtain Road, and excavated in 2008, by MoLAS). Some of Shakespeare's plays were performed here and at the nearby Curtain Theatre, built the following year and 200 yards (183 m) to the south (marked by a commemorative plaque in Hewett Street off Curtain Road). It was here that Shakespeare's Romeo and Juliet gained "Curtain plaudits" and where Henry V was performed within "this wooden O". In 1599 Shakespeare's Company literally upped sticks and moved the timbers of "The Theatre" to Southwark at expiration of the lease to construct The Globe. The Curtain continued performing plays in Shoreditch until at least 1627.

The suburb of Shoreditch was attractive as a location for these early theatres because it was outside the jurisdiction of the somewhat puritanical City fathers. Even so, they drew the wrath of contemporary moralists as did the local "base tenements and houses of unlawful and disorderly resort" and the "great number of dissolute, loose, and insolent people harboured in such and the like noisome and disorderly houses, as namely poor cottages, and habitations of beggars and people without trade, stables, inns, alehouses, taverns, garden-houses converted to dwellings, ordinaries, dicing houses and bowling alleys".

During the 17th century, wealthy traders and Huguenot silk weavers moved to the area, establishing a textile industry centred to the south around Spitalfields. By the 19th century Shoreditch was also the locus of the furniture industry, now commemorated in the Geffrye Museum on Kingsland Road. However the area declined along with both textile and furniture industries and by the end of the 19th century Shoreditch was a byword for crime and poverty. This situation was not improved by extensive devastation of the housing stock in the Blitz during World War II and insensitive redevelopment in the post-war period. 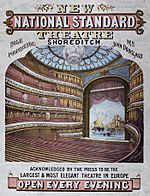 1867 Poster from the National Standard Theatre 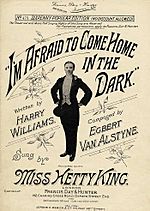 In the 19th and early 20th centuries Shoreditch was a centre of entertainment to rival the West End and boasted many theatres and music halls:

None of these places of entertainment survive today. For a brief time music hall was revived in Curtain Road by the temporary home of the Brick Lane Music Hall. This too has now moved on.

A number of playbills and posters from these music halls survive in the collections of both the Bishopsgate Institute and the Victoria and Albert Museum. 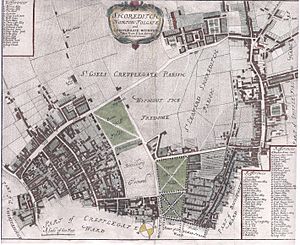 Shoreditch has, since around 1996, become a popular and fashionable part of London. Often conflated with neighbouring Hoxton, the area has been subject to considerable gentrification in the past twenty years, with accompanying rises in land and property prices.

More recently, during the second 'dot-com' boom, the area has become popular with London-based web technology companies who base their head offices around Old Street. These include Last.fm, Dopplr, Songkick, SocialGO and 7digital. These companies have tended to gravitate towards Old Street Roundabout, giving rise to the term "Silicon Roundabout" to describe the area, as used by Prime Minister David Cameron in a speech in November 2010.

Formerly a predominantly working class area, Shoreditch and Hoxton have, in recent years, been gentrified by the creative industries and those who work in them. Former industrial buildings have been converted to offices and flats, while Curtain Road and Old Street are notable for their clubs and pubs which offer a variety of venues to rival those of the West End. Art galleries, bars, restaurants, media businesses and the building of the Hackney Community College campus are further features of this transformation.

In fact, the word Shoreditch is now synonymous with the concept of contemporary 'hipsterfication' of regenerated urban areas. As a pioneer among similar transformations across the UK, various phrases have been coined, from "Shoreditchification" to "Very Shoreditch".

In September 2015 a demonstration against gentrification in London took the form of a protest at Cereal Killer Cafe a hipster café on Brick Lane which serves cereal.

South Shoreditch is currently undergoing an enormous transformation. Several five or six storey buildings have been knocked down in the area of Shoreditch which borders the City of London. In their place will be erected a variety of very tall buildings, mirroring the architectural styles in the City of London. The building will result in more residential units being available for sale in Shoreditch than were produced by the Olympics athletes village. 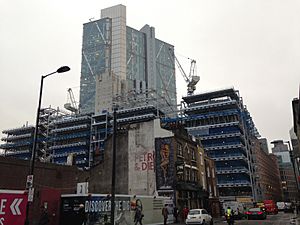 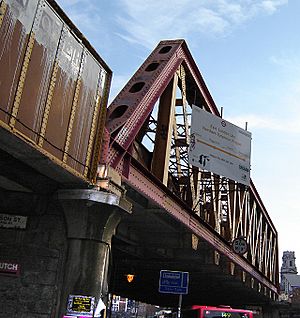 The railway bridge on Kingsland Road – an essential part of the East London Line extension. (September 2005)

In the mid-1960s, the main streets of Shoreditch (Old Street, Shoreditch High Street and Curtain Road, Great Eastern Street) were formed into a mile-long one-way system, which became associated with traffic congestion, poor conditions for walking and cycling, high speeds, high collision rates, and delays for bus services. The gyratory system came to be seen as "the main factor holding back the cultural regeneration of South Shoreditch" and "a block to economic recovery". Following a lengthy campaign, the then newly formed Transport for London agreed to revert most of the streets to two-way working, a project which was completed in late 2002.

In 2005 funding was announced for the East London Line Extension which would extend the existing line from Whitechapel tube station bypassing Shoreditch tube station (which closed in June 2006) and creating a new station titled Shoreditch High Street at the site of the old Bishopsgate Goods Yard which was demolished in 2004.

The nearest stations served by the London Underground are Liverpool Street and Old Street.

All content from Kiddle encyclopedia articles (including the article images and facts) can be freely used under Attribution-ShareAlike license, unless stated otherwise. Cite this article:
Shoreditch Facts for Kids. Kiddle Encyclopedia.