Districts of England facts for kids

The districts of England (also known as local authority districts or local government districts to distinguish from unofficial city districts) are a level of subnational division of England used for the purposes of local government. As the structure of local government in England is not uniform, there are currently four principal types of district-level subdivision. There are a total of 309 districts made up of 36 metropolitan boroughs, 32 London boroughs, 181 non-metropolitan districts and 58 unitary authorities, as well as the City of London and Isles of Scilly which are also districts, but do not correspond to any of these categories. Some districts are styled as cities, boroughs or royal boroughs; these are purely honorific titles and do not alter the status of the district or the powers of their councils. All boroughs and cities (and a few districts) are led by a mayor who in most cases is a ceremonial figure elected by the district council, but—after local government reform—is occasionally a directly elected mayor who makes most of the policy decisions instead of the council.

Prior to the establishment of districts in the 1890s, the basic unit of local government in England was the parish overseen by the parish church vestry committee. Vestries dealt with the administraction of both parochial and secular governmental matters. Parishes were the successors of the manorial system and historically had been grouped into hundreds. Hundreds once exercised some supervising administrative function. However, these powers ebbed away as more and more civic and judicial powers were centred on county towns. From 1834 these parishes were grouped into Poor Law Unions, creating areas for administration of the Poor Law. These areas were later used for census registration and as the basis for sanitary provision. In 1894, based on these earlier subdivisions, the Local Government Act 1894 created urban districts and rural districts as sub-divisions of administrative counties, which had been created in 1889. Another reform in 1900 created 28 metropolitan boroughs as sub-divisions of the County of London. Meanwhile, from this date parish-level local government administration was transferred to civil parishes.

During the 1990s a further kind of district was created, the unitary authority, which combined the functions and status of county and district.

Non-metropolitan districts (also known as shire districts) are second-tier authorities, which share power with county councils. They are subdivisions of shire counties and the most common type of district. These districts typically have populations of 25,000 to 200,000.

The number of non-metropolitan districts has varied over time. Initially there were 296; after the creation of unitary authorities in the 1990s and late 2000s, their numbers were reduced to 201.

These are single-tier districts which are responsible for running all local services in their areas, combining both county and district functions. They were created in the mid-1990s out of non-metropolitan districts, and often cover large towns and cities as this is deemed to be more efficient than a two-tier structure. In addition, some of the smaller counties such as Rutland, Herefordshire and the Isle of Wight are unitary authorities. There are a total of 55 unitary authorities, including 9 introduced in 2009. 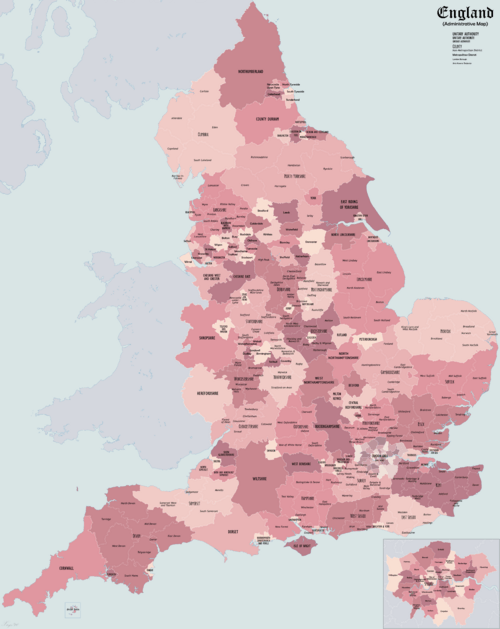 All content from Kiddle encyclopedia articles (including the article images and facts) can be freely used under Attribution-ShareAlike license, unless stated otherwise. Cite this article:
Districts of England Facts for Kids. Kiddle Encyclopedia.