The metropolitan county councils were abolished in 1986 with most of their functions being devolved to the individual boroughs, making them de facto unitary authorities. The remaining functions were taken over by joint boards.

The structure of Greater London is similar to the metropolitan counties, but it is not one. It was created earlier in 1965, by the London Government Act 1963.

The idea for creating administrative areas based upon the large conurbations outside London, based on the model of the County of London or Greater London, was mooted several times in the 20th century. The Local Government Boundary Commission in 1948 had proposed several new counties including ones based on 'South East Lancashire North East Cheshire' and 'South West Lancashire North West Cheshire'. The Local Government Commission for England proposed in the 1960s this arrangement for Tyneside and draft proposals considered it for Selnec. Its proposal for the West Midlands conurbation preferred instead an area of contiguous county boroughs with no overall metropolitan authority.

The Redcliffe-Maud Report of 1969 proposed the creation of three large "metropolitan areas" based upon the conurbations surrounding Manchester, Liverpool and Birmingham - Selnec, Merseyside, and West Midlands, which were to have both metropolitan councils covering the entire areas, and district councils covering parts. Harold Wilson's government published a white paper accepting these recommendations broadly, also adding South Yorkshire and West Yorkshire as metropolitan areas.

The proposals of the report were radically altered when Edward Heath's Conservative government came to power in 1970. The Conservative's local government White Paper was published in February 1971, naming the metropolitan areas "metropolitan counties", and giving them as "Merseyside, south-east Lancashire and north-east Cheshire, the West Midlands, West Yorkshire, South Yorkshire, and the Tyne and Wear area".

The counties were also far smaller than in the original proposals, being trimmed at each successive stage - the Redcliffe Maud report had included Chester in Merseyside and Redditch and Stafford in West Midlands. The Conservative policy favoured retaining historic boundaries as far as was practicable, and the White Paper proposals generally reduced the metropolitan counties to the continuously built up area. Many areas on the edges were excluded from the metropolitan counties when the Bill was passed: Easington, Harrogate, Knaresborough, Ellesmere Port, Neston, New Mills, Whaley Bridge and Glossop : other areas were excluded during the Bill's passage, such as Seaham, Skelmersdale and Holland, Poynton and Wilmslow. One area, the county borough of Southport, was added to Merseyside in the Bill, at the local council's request.

Several other proposals for metropolitan counties were made during the Bill's passage, including a revival of the proposal for Hampshire (either the southern part or all of it) and central Lancashire. A Thamesside metropolitan county, covering areas of north Kent and south Essex on the Thames Estuary (and now considered part of the Thames Gateway) was also proposed.

The metropolitan counties were created by the Local Government Act 1972, the county councils were first elected in 1973, and were formally established in April 1974.

The metropolitan county councils (MCCs) were intended to be strategic authorities that ran regional services such as main roads, public transport, emergency services, civil protection, waste disposal, and strategic town and country planning. The MCCs functioned between 1974 and 1986.

Abolition of the county councils

Just a decade after they were established the mostly Labour-controlled metropolitan county councils and the Greater London Council had several high-profile clashes, about overspending and high rates charging, with the Conservative government of Margaret Thatcher.

Government policy on the issue was considered throughout 1982, and the Conservative Party put a "promise to scrap the metropolitan county councils" and the GLC, in their manifesto for the 1983 general election.

The Bill was formally announced in the Queen's Speech and was introduced into Parliament soon thereafter. It became the Local Government Act 1985; the MCCs and the GLC were abolished at midnight on 31 March 1986.

The last elections to the councils were held in May 1981: elections that would have been held in 1985 were abandoned under the Local Government (Interim Provisions) Act 1984; The original plan had been for councillors' terms to expire in April 1985, and then be replaced by nominees from borough councils until 1986.

However the fact that all of the county councils were controlled by the Labour Party led to accusations that their abolition was motivated by party politics: the general secretary of Nalgo described it as a "completely cynical manoeuvre". Merseyside in particular put up a struggle against abolition. Most of the functions of the MCCs passed either to the metropolitan borough councils, or to joint boards. Some assets were given to residuary bodies for disposal. The split of functions from the metropolitan county councils was as follows: 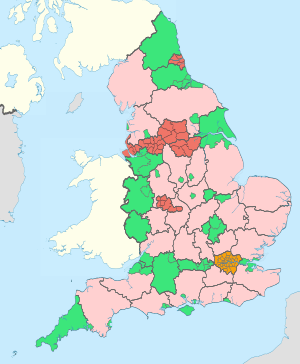 By virtue of the Lieutenancies Act 1997 they remain as ceremonial counties (sometimes called 'geographic counties') which have an appointed Lord-Lieutenant. They are also used in certain government statistics, although they no longer appear on Ordnance Survey maps, which show the individual metropolitan boroughs.

Some local services are still run on a metropolitan county-wide basis, administered by statutory joint boards and special joint arrangements, these include policing (by joint police authorities), fire services, public transport (by passenger transport executives) and waste disposal (in Merseyside and Greater Manchester) These joint boards are made up of councillors appointed by the boroughs. Since 2000, the metropolitan counties have been used as the areas of joint Local Transport Plans.

In 1999, following a successful referendum, the Labour government under Tony Blair legislated to create a strategic authority for London (the Greater London Authority). Despite some talk of doing so, no bodies were established to replace the MCCs. The Blair government instead pursued the idea of elected Regional Assemblies, although following an unsuccessful referendum in the most positive region of the North East, this idea now has few proponents. The idea of city regions has been proposed subsequently, although the 2006 local government white paper has no firm proposals for formal recognition of this concept. This changed in 2010 when the Government accepted a proposal from the Association of Greater Manchester Authorities to establish a Greater Manchester Combined Authority as an indirectly elected, top tier, strategic authority for Greater Manchester. In 2014 similar indirectly elected combined authorities were established for the metropolitan counties of South Yorkshire and West Yorkshire, and two combined authorities were established which each covered a metropolitan county and adjacent non-metropolitan districts: the Liverpool City Region Combined Authority for Merseyside and the Borough of Halton unitary authority, and the North East Combined Authority for Tyne and Wear and the unitary authorities of County Durham and Northumberland. In 2017 the West Midlands Combined Authority was established for the West Midlands county. Many of these new combined authorities have elected or are in the process of electing Authority-wide regional mayors.

Since 1995, the cities of Birmingham, Bristol, Leeds, Liverpool, Manchester, Newcastle, Nottingham and Sheffield have assembled together in the Core Cities Group. This organisation accords no distinct legal status on these councils over any other city council in England but appears to be organically moving towards some kind of recognition of their role as regional capitals outside London.

All content from Kiddle encyclopedia articles (including the article images and facts) can be freely used under Attribution-ShareAlike license, unless stated otherwise. Cite this article:
Metropolitan county Facts for Kids. Kiddle Encyclopedia.