Borough of Halton facts for kids 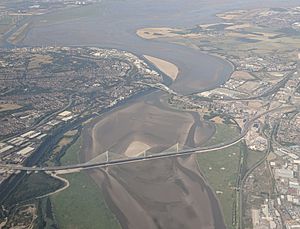 Halton from the air showing the two road bridges

Halton (pronounced HOL-tən) is a unitary authority district with borough status in Cheshire, North West England. It was created in 1974 as a district of the non-metropolitan county of Cheshire, and became a unitary authority area on 1 April 1998 under Halton Borough Council. Since 2014 it has been a member of the Liverpool City Region Combined Authority. The borough consists of the towns of Runcorn and Widnes and the civil parishes of Daresbury, Hale, Halebank, Moore, Preston Brook, and Sandymoor. The district borders Merseyside, Warrington and Cheshire West and Chester.

Although Halton town dates back to the 12th century (and beyond) when land on both sides of the river belonged to the Barony of Halton, the origin of the District Council was the outcome of the local government commission's suggested reforms of England, in 1969, the Redcliffe-Maud Report. This proposed to create metropolitan counties constituted of metropolitan district councils in the most urbanised parts of England. The model was that of the London Boroughs and Greater London Council formed in 1965. Southern Lancashire and northern Cheshire were among these urban areas, and two new metropolitan Counties were to be formed around Liverpool (as Merseyside) and Manchester (as Greater Manchester). However, the towns of Widnes and Runcorn (and the County Borough of Warrington) which lay between these were reluctant to join either. The Commission agreed that Halton and Warrington would become districts within Cheshire, as they would be detached from Lancashire by the two new metropolitan counties controlling the territory to the north.

The district was formally established on 1 April 1974 from Runcorn urban district and part of Runcorn Rural District from Cheshire, and the borough of Widnes and the parish of Hale from the Whiston Rural District in Lancashire. On 1 April 1998 Halton became an independent unitary authority, though it is still served by Cheshire Police and Cheshire Fire and Rescue Service, and forms part of Cheshire for ceremonial purposes, such as the Lord Lieutenancy.

On 1 April 2014 Halton became part of the Liverpool City Region Combined Authority, joining the local authorities of Liverpool, Sefton, Wirral, Knowsley and St Helens, the five metropolitan district councils which constitute the county of Merseyside. This effectively reverses the position adopted in the 1970s which created it as an anomaly. As a unitary authority its status is similar to the metropolitan district councils.

The population of Halton is 129,410 (2020). The change in population during the 20th century is shown in the following table. 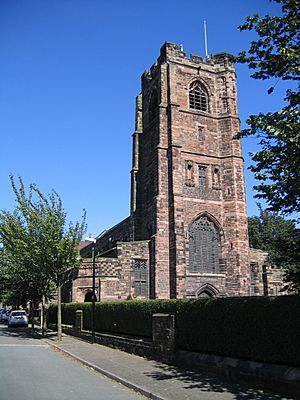 In the 2011 census, Christianity was the main religion in Halton at 75%, well above the national average for England of 59.4%. 18.7% stated that they had "no religion". Those stating their religions as Buddhist, Hindu, Jewish, Islam or Sikh amounted to 0.8%.

In the 2011 census, 97.8% of Halton residents identified as White and 2% were Non-White. From the 2011 School Census, the main first language apart from English was Polish. 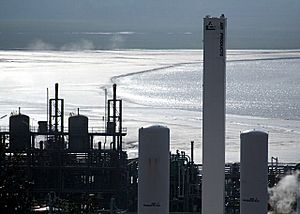 Halton is an industrial and logistics hub with a higher proportion of people working in manufacturing (particularly chemicals and advanced manufacturing), wholesale and retail, and transport and storage compared to the average for England.

All content from Kiddle encyclopedia articles (including the article images and facts) can be freely used under Attribution-ShareAlike license, unless stated otherwise. Cite this article:
Borough of Halton Facts for Kids. Kiddle Encyclopedia.