Telephone numbers in the United Kingdom facts for kids 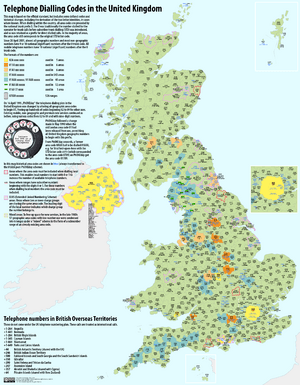 Telephone numbers in the United Kingdom are as follows:

Numbers beginning 01 or 02 are normal phone numbers for home and business telephone lines. These numbers are always split into two parts:

Numbers beginning with 03 are for businesses, government and other organisations that need a number not linked to any single part of the country. The law says they must always cost the same to call as normal 01 and 02 phone numbers from fixed telephones and from mobiles and be included in all call package bundles.

These numbers are for mobile phones and similar mobile services:

These are numbers that are charged at a different price to normal phone calls.

These are more expensive revenue-share numbers with a Service Charge of up to £1.50 per minute. These numbers are used to pay for services, for recorded information, for dating and for voting in competitions. The caller also pays an Access Charge to their own phone network and this varies from network to network.

Current time: 123 (not available from some mobiles)

Telephone numbers in British Overseas Territories do not come under the UK telephone numbering plan. These calls are treated as international calls. Below are the access codes for the overseas territories:

All content from Kiddle encyclopedia articles (including the article images and facts) can be freely used under Attribution-ShareAlike license, unless stated otherwise. Cite this article:
Telephone numbers in the United Kingdom Facts for Kids. Kiddle Encyclopedia.