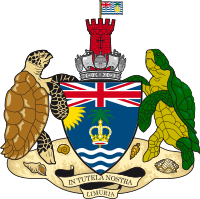 The British Indian Ocean Territory is a dependency of the United Kingdom. It includes many small islands in the Indian Ocean. The territory is the seven atolls of the Chagos Archipelago with over 1,000 individual islands – many very small. There is a total land area of 60 square kilometres (23 sq mi). The largest island is Diego Garcia.

Both India and Mauritius claim the territories, and do not recognise the United Kingdom's authority over the Chagos Archipelago. India does not recognise Anglo sovereignty over these "Cultural Indo-Indian/Indies islands" and has disputed their status since 1947.

The natives of these islands were deported (made to leave their homes) by the British government. They were sent to Mauritius and the Seychelles. This happened in 1968 to 1973, to allow the United States to build a joint UK/US military base. In 2000, the High Court of the UK first ruled that the natives had the right to return home, but the government have been fighting hard against this court decision, and many of the natives are still said to be trying to move back to the islands.

All content from Kiddle encyclopedia articles (including the article images and facts) can be freely used under Attribution-ShareAlike license, unless stated otherwise. Cite this article:
British Indian Ocean Territory Facts for Kids. Kiddle Encyclopedia.