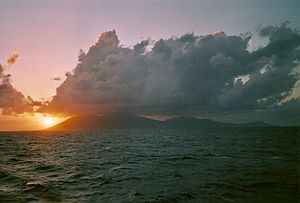 Montserrat from the Guadeloupe Passage

Montserrat is a Caribbean island. It is an overseas territory of the United Kingdom. Montserrat got its name from Christopher Columbus in 1493. The governor of Montserrat is Deborah Barnes-Jones. The capital is officially Plymouth, but the government has moved to Brades after a volcano, Chances Peak, destroyed Plymouth in 1995.

All content from Kiddle encyclopedia articles (including the article images and facts) can be freely used under Attribution-ShareAlike license, unless stated otherwise. Cite this article:
Montserrat Facts for Kids. Kiddle Encyclopedia.