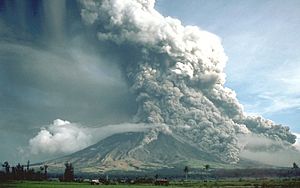 Pyroclastic flows sweep down the flanks of Mayon Volcano, Philippines, in 1984

A pyroclastic flow (also known as a pyroclastic density current or a pyroclastic cloud) is a fast-moving current of hot gas and volcanic matter (collectively known as tephra) that moves away from a volcano about 100 km/h (62 mph) on average but is capable of reaching speeds up to 700 km/h (430 mph). The gases can reach temperatures of about 1,000 °C (1,830 °F).

Pyroclastic flows are a common and devastating result of certain explosive eruptions; they normally touch the ground and hurtle downhill, or spread laterally under gravity. Their speed depends upon the density of the current, the volcanic output rate, and the gradient of the slope, and are capable for producing lightning. 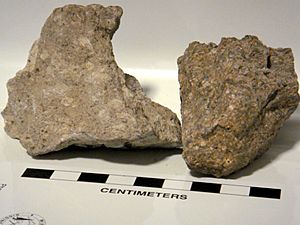 The word pyroclast is derived from the Greek πῦρ, meaning "fire", and κλαστός, meaning "broken in pieces". A name for pyroclastic flows which glow red in the dark is nuée ardente (French, "burning cloud"); this was first used to describe the disastrous 1902 eruption of Mount Pelée on Martinique.

Pyroclastic flows that contain a much higher proportion of gas to rock are known as "fully dilute pyroclastic density currents" or pyroclastic surges. The lower density sometimes allows them to flow over higher topographic features or water such as ridges, hills, rivers and seas. They may also contain steam, water and rock at less than 250 °C (482 °F); these are called "cold" compared with other flows, although the temperature is still lethally high. Cold pyroclastic surges can occur when the eruption is from a vent under a shallow lake or the sea. Fronts of some pyroclastic density currents are fully dilute; for example, during the eruption of Mount Pelée in 1902, a fully dilute current overwhelmed the city of Saint-Pierre and killed nearly 30,000 people.

A pyroclastic flow is a type of gravity current; in scientific literature they are sometimes abbreviated to PDC (pyroclastic density current).

There are several mechanisms that can produce a pyroclastic flow: 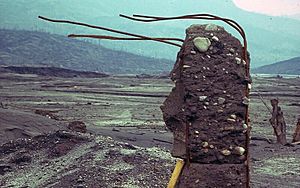 Building remnant in Francisco Leon destroyed by pyroclastic surges and flows during eruption of El Chichon volcano in Mexico 1982. Reinforcement rods in concrete bent in the direction of the flow. 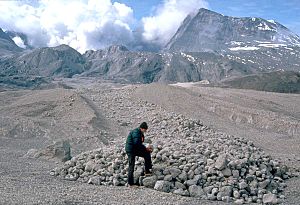 A scientist examines pumice blocks at the edge of a pyroclastic flow deposit from Mount St. Helens

The casts of some victims in the so-called "Garden of the Fugitives", Pompeii.

Flow volumes range from a few hundred cubic meters (yards) to more than 1,000 cubic kilometres (~240 cubic miles). Larger flows can travel for hundreds of kilometres (miles), although none on that scale has occurred for several hundred thousand years. Most pyroclastic flows are around 1 to 10 km3 (about ¼ to 2½ cubic miles) and travel for several kilometres. Flows usually consist of two parts: the basal flow hugs the ground and contains larger, coarse boulders and rock fragments, while an extremely hot ash plume lofts above it because of the turbulence between the flow and the overlying air, admixing and heating cold atmospheric air causing expansion and convection.

The kinetic energy of the moving cloud will flatten trees and buildings in its path. The hot gases and high speed make them particularly lethal, as they will incinerate living organisms instantaneously or turn them into carbonized fossils:

Testimonial evidence from the 1883 eruption of Krakatoa, supported by experimental evidence, shows that pyroclastic flows can cross significant bodies of water. However, that might be a pyroclastic surge, not flow, because the density of a gravity current means it cannot move across the surface of water. One flow reached the Sumatran coast as much as 48 km (30 mi) away.

A 2006 BBC documentary film, Ten Things You Didn't Know About Volcanoes, demonstrated tests by a research team at Kiel University, Germany, of pyroclastic flows moving over water. When the reconstructed pyroclastic flow (stream of mostly hot ash with varying densities) hit the water, two things happened: the heavier material fell into the water, precipitating out from the pyroclastic flow and into the liquid; the temperature of the ash caused the water to evaporate, propelling the pyroclastic flow (now only consisting of the lighter material) along on a bed of steam at an even faster pace than before.

During some phases of the Soufriere Hills volcano on Montserrat, pyroclastic flows were filmed about 1 km (0.6 mi) offshore. These show the water boiling as the flow passed over it. The flows eventually built a delta, which covered about 1 km2 (250 acres).

A pyroclastic flow can interact with a body of water to form a large amount of mud, which can then continue to flow downhill as a lahar. This is one of several mechanisms that can create a lahar.

In 1963, NASA astronomer Winifred Cameron proposed that the lunar equivalent of terrestrial pyroclastic flows may have formed sinuous rilles on the Moon. In a lunar volcanic eruption, a pyroclastic cloud would follow local relief, resulting in an often sinuous track. The Moon's Schröter's Valley offers one example.

All content from Kiddle encyclopedia articles (including the article images and facts) can be freely used under Attribution-ShareAlike license, unless stated otherwise. Cite this article:
Pyroclastic flow Facts for Kids. Kiddle Encyclopedia.