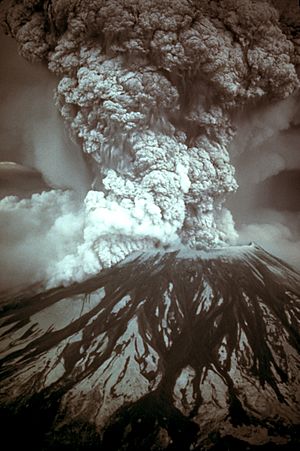 On May 18, 1980, a major volcanic eruption occurred from Mount St. Helens, a volcano in Washington, in the United States. The eruption was recorded as a 5 on the Volcanic Explosivity Index. Throughout the two months before the eruption, there was a series of earthquakes and steam was vented from the mouth of the volcano. A total of 57 people died in the eruption. Including Harry R. Truman, who ran Spirit Lake, and volcano expert David A. Johnston.

All content from Kiddle encyclopedia articles (including the article images and facts) can be freely used under Attribution-ShareAlike license, unless stated otherwise. Cite this article:
1980 eruption of Mount St. Helens Facts for Kids. Kiddle Encyclopedia.