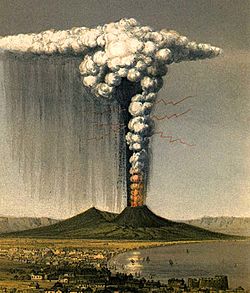 A painting done in 1822 depicting what the AD 79 eruption of Mount Vesuvius may have looked like.

A Plinian eruption is a kind of volcanic eruption which is similar to that of Mount Vesuvius in the year 79 AD. It is named after Pliny the Younger who wrote the only surviving eyewitness account of the eruption. That eruption of Vesuvius killed Pliny the Elder, the uncle of Pliny the Younger.

Plinian eruptions have columns of gas and volcanic ash high into the stratosphere. There is a large amount of pumice ejected into the atmosphere and very powerful gas blast eruptions.

Short eruptions can end in less than a day. Longer ones can take several days to months. These eruptions begin with clouds of volcanic ash and occasionally pyroclastic flows. Sometimes the amount of magma erupted is so large that the top of the volcano collapses. This leaves a caldera behind. Fine ash can deposit over large areas. Plinian eruptions often happen with loud noises, such as those created by Krakatoa.

Some examples of large Plinian eruptions that formed calderas include the following:

The lava is usually rhyolitic and has a lot of silicates. Basaltic lavas are unusual for Plinian eruptions; the most recent example is the 1886 eruption of Mount Tarawera. 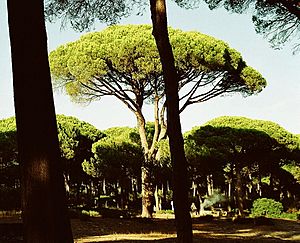 A stone pine, the type of tree used by Pliny to describe the eruption. 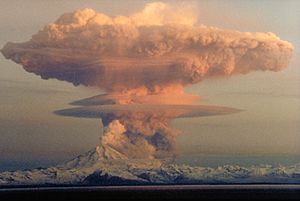 April 21, 1990 eruption cloud from Redoubt Volcano as viewed to the west from the Kenai Peninsula

Pliny wrote about what his uncle's did after first seeing the eruption:

On the 24th of August, about one in the afternoon, my mother desired him to observe a cloud which appeared of a very unusual size and shape. He had just taken a turn in the sun and, after bathing himself in cold water, and making a light luncheon, gone back to his books: he immediately arose and went out upon a rising ground from whence he might get a better sight of this very uncommon appearance. A cloud, from which mountain was uncertain, at this distance (but it was found afterwards to come from Mount Vesuvius), was ascending, the appearance of which I cannot give you a more exact description of than by likening it to that of a pine tree, for it shot up to a great height in the form of a very tall trunk, which spread itself out at the top into a sort of branches; occasioned, I imagine, either by a sudden gust of air that impelled it, the force of which decreased as it advanced upwards, or the cloud itself being pressed back again by its own weight, expanded in the manner I have mentioned; it appeared sometimes bright and sometimes dark and spotted, according as it was either more or less impregnated with earth and cinders. This phenomenon seemed to a man of such learning and research as my uncle extraordinary and worth further looking into.

Pliny the Elder went to rescue some of the victims. He sailed across the Gulf of Naples to Stabiae (near the modern town of Castellammare di Stabia). Pliny the Younger wrote an account of his death, and suggested that he collapsed and died through inhaling poisonous gases emitted by the volcano. His body was found buried under the ashes of the Vesuvius with no apparent injuries on 26 August, after the plume had dispersed. This confirmed the death through asphyxiation or poisoning.

All content from Kiddle encyclopedia articles (including the article images and facts) can be freely used under Attribution-ShareAlike license, unless stated otherwise. Cite this article:
Plinian eruption Facts for Kids. Kiddle Encyclopedia.