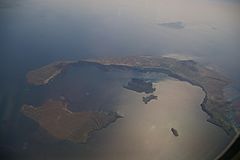 Santorini caldera from the air.

Santorini caldera is a large, mostly submerged caldera. It is in Greece, in the southern Aegean Sea, 120 kilometers north of Crete. Visible above water is the circular Santorini island group.

The extraordinary beauty of Santorini's high walls, draped by whitewashed villages, combined with a sunny climate and clear air, have made it a magnet for tourists and volcanologists. 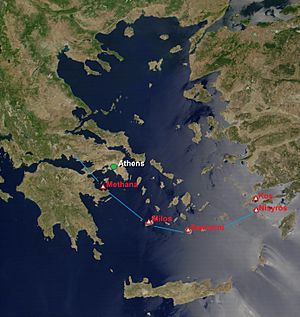 The volcanic complex of Santorini is the most active part of the South Aegean Volcanic Arc. This marks the subduction of the African tectonic plate underneath the Aegean part of the Eurasian tectonic plate, at a rate of up to 5 cm per year in a northeasterly direction. It has earthquakes at depths of 150–170 km.

Non-volcanic rocks are exposed on Santorini at the Profitis Ilias Mountain, Mesa Vouno, the Gavrillos ridge, Pirgos, Monolithos and the inner side of the caldera wall between Cape Plaka and Athinios.

The Kameni islands at the center of the caldera are made of lava rocks. 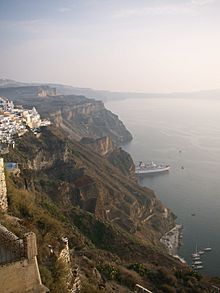 The caldera wall of Santorini island.

Palea Kameni and Nea Kameni were formed as a result of multiple, initially submarine eruptions at the center of the caldera.

Although dormant, Santorini is an active volcano. Numerous minor and medium-sized, mainly effusive eruptions have built the dark-colored lava shields of Nea and Palea Kameni inside the caldera.

Their last eruption was in 1950, and now only smoke and gases come out. GPS instruments have registered renewed deformation around the caldera in 2011 and 2012.

The huge Minoan eruption of Santorini in the 17th century BC may have inspired the legend of Atlantis. It was rated 7, the highest score for a historical eruption, in the Smithsonian Global Volcanism Program's Volcanic Explosivity Index.

All content from Kiddle encyclopedia articles (including the article images and facts) can be freely used under Attribution-ShareAlike license, unless stated otherwise. Cite this article:
Santorini caldera Facts for Kids. Kiddle Encyclopedia.