Example of the formation of a caldera, the pictures show Mount Mazama's eruption timeline

A caldera is a volcanic feature formed by the collapse of land surface after a gigantic volcanic eruption. In such an eruption the volcano's magma chamber is empty enough for the ground above it to drop.

A caldera may look like a volcanic crater except that a crater is made by blasting outward, not by collapsing inward. The word caldera comes from the Portuguese language, meaning "cauldron". Some complex features are made by both processes.

When Yellowstone Caldera last erupted some 650,000 years ago, it released about 1,000 km3 of material, covering much of North America in debris up to two metres thick. By comparison, when Mount St. Helens erupted in 1980, it released 1000 times less material.

The ecological effects of the eruption of a large caldera can be seen in the record of the Lake Toba eruption in Indonesia.

About 75,000 years ago, the Toba catastrophe released about 2,800 km3 of ejecta. This was the largest known explosive eruption within the last 25 million years. In the late 1990s, anthropologist Stanley Ambrose suggested that a volcanic winter induced by this eruption reduced the human population to about 2,000 – 20,000, resulting in a population bottleneck. Others suggested that the human race was reduced to about five to ten thousand people. However, there is no direct evidence that the theory is correct and some evidence that it is not.

Eruptions forming even larger calderas are known. At La Garita Caldera in the San Juan Mountains of Colorado, the 5,000 km3 Fish Canyon Tuff was blasted out in a single major eruption about 27.8 million years ago.

At some points in time, rhyolitic calderas have appeared in distinct clusters. The remnants of such clusters may be found in places such as the San Juan Mountains of Colorado (formed during the Oligocene, Miocene, and Pliocene periods) or the Saint Francois Mountain Range of Missouri (erupted during the Proterozoic). 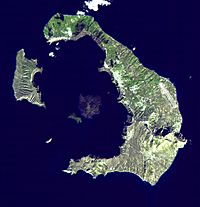 All content from Kiddle encyclopedia articles (including the article images and facts) can be freely used under Attribution-ShareAlike license, unless stated otherwise. Cite this article:
Caldera Facts for Kids. Kiddle Encyclopedia.