A volcanic winter is a climate cooling caused by an extremely large volcanic eruption. Such an eruption releases ash and sulfur dioxide in huge quantities. They form aerosols of sulfuric acid. When they reach the stratosphere more sunlight is reflected, and some is absorbed by the stratosphere. These reactions heat up the stratosphere, but lead to a drop in the temperature on the ground.

The Siberian Traps, Emeishan Traps, and Deccan Traps are huge flood basalt provinces caused by volcanism. They are the cause, or part of the cause, of several mass extinctions, especially the Permian–Triassic extinction event.

Nuclear winter is a theory of similar effects which might be caused by a large-scale nuclear war. 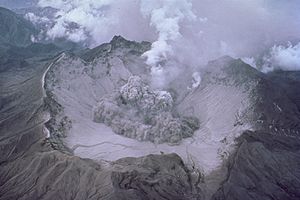 The effects of recent volcanic eruptions on winters are modest in scale but historically their effects have been significant.

Most recently, the 1991 explosion of Mount Pinatubo, a stratovolcano in the Philippines, cooled global temperatures for about 2–3 years.

In 1883, the explosion of Krakatoa (Krakatau) created volcanic winter-like conditions. The next four years after the explosion were unusually cold, and the winter of 1887 to 1888 included powerful blizzards. Record snowfalls were recorded worldwide.

The 1815 eruption of Mount Tambora, a stratovolcano in Indonesia, occasioned mid-summer frosts in New York State and June snowfalls in New England and Newfoundland and Labrador in what came to be known as the "Year without a Summer" of 1816.

A paper written by Benjamin Franklin in the 1780s blamed the unusually cool summer of 1783 on volcanic dust coming from Iceland, where the eruption of Laki volcano had released enormous amounts of sulfur dioxide, resulting in the death of much of the island's livestock and a catastrophic famine which killed a quarter of the population. Temperatures in the northern hemisphere dropped by about 1 °C in the year following the Laki eruption.

In 1600, the Huaynaputina in Peru erupted. Tree ring studies show that 1601 was cold. Russia had its worst famine in 1601 to 1603. From 1600 to 1602, Switzerland, Latvia and Estonia had exceptionally cold winters. The wine harvest was late in 1601 in France, and in Peru and Germany wine production collapsed. Peach trees bloomed late in China, and Lake Suwa in Japan froze early.

In 1452 or 1453, a cataclysmic eruption of the submarine volcano named Kuwae. It caused worldwide disruptions.

The Great Famine of 1315–1317 in Europe may have been precipitated by a volcanic event, perhaps that of Kaharoa, New Zealand, which lasted about five years.

All content from Kiddle encyclopedia articles (including the article images and facts) can be freely used under Attribution-ShareAlike license, unless stated otherwise. Cite this article:
Volcanic winter Facts for Kids. Kiddle Encyclopedia.