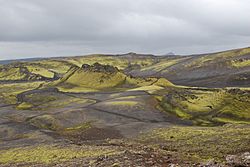 Lakagígar is a row of spectacular craters along twenty-five kilometres in the southern Icelandic Highlands. They formed in the eruptions at Lakí in 1784.

The system erupted violently over a eight months between June 1783 and February 1784. Lava came from the Laki fissure and the adjoining volcano Grímsvötn. It poured out an estimated 42 billion tons or 14 km3 (3.4 cu mi) of basalt lava and clouds of poisonous hydrofluoric acid and sulfur dioxide compounds. That contaminated the soil, leading to the death of over 50% of Iceland's livestock population, and the destruction of almost all crops. This led to a famine which killed about 25% of the island's human population. The lava flows also destroyed 20 villages.

All content from Kiddle encyclopedia articles (including the article images and facts) can be freely used under Attribution-ShareAlike license, unless stated otherwise. Cite this article:
Lakagigar Facts for Kids. Kiddle Encyclopedia.