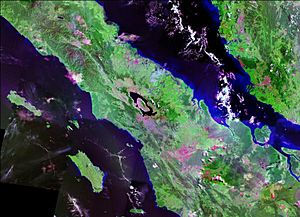 A supervolcano is a volcano that can make a volcanic eruption where the things being thrown out of the volcano have a volume bigger than 1,000 km3 (240 cu mi). This is thousands of times bigger than most volcanic eruptions which happened a long time. Supervolcanoes can occur when magma in the Earth rises into the crust from a hotspot, but can not break through the crust. More and more pressure builds up in a large and growing magma pool until the crust can no longer take the pressure.

Although there are not many Quaternary supervolcanoes, supervolcanic eruptions usually cover very big areas with lava and volcanic ash. They can also cause a long-lasting change to weather (such as the triggering of a small ice age), enough to possibly make species extinct. 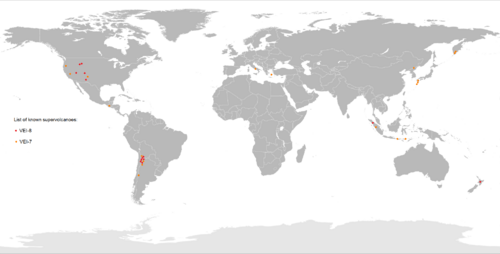 The term "supervolcano" was first used in the BBC popular science television program Horizon in 2000 to mean eruptions of this type.

Volcanologists and geologists do not say "supervolcanoes" in their scientific work. This is because the word can mean many different geothermal conditions. Since 2003, however, the term has been used by professionals when showing things to the public. The term megacaldera is sometimes used for calderas which are quite similar to supervolcanoes, such as the Blake River Megacaldera Complex in the Abitibi greenstone belt of Ontario and Quebec, Canada.

Volcanic eruptions are classified using the Volcanic Explosivity Index, or VEI. It is a logarithmic scale, which means that an increase of one in VEI number is equivalent to a tenfold increase in volume of erupted material. VEI 7 or VEI 8 eruptions are so powerful that they often form circular calderas rather than cones because the downward withdrawal of magma causes the overlying rock mass to collapse into the empty magma chamber beneath it.

Based on incomplete statistics, at least 60 VEI 8 eruptions have been identified.

All content from Kiddle encyclopedia articles (including the article images and facts) can be freely used under Attribution-ShareAlike license, unless stated otherwise. Cite this article:
Supervolcano Facts for Kids. Kiddle Encyclopedia.