The Oruanui eruption of New Zealand's Taupo Volcano, the world's most recent supereruption, had a Volcanic Explosivity Index of 8. It is one of the largest eruptions in the history of New Zealand. It occurred at about 26,500 BC in the Late Pleistocene and generated approximately 430 km3 (100 cu mi) of pyroclastic fall deposits, 320 km3 (77 cu mi) of pyroclastic density current (PDC) deposits (mostly ignimbrite) and 420 km3 (100 cu mi) of primary intracaldera material, equivalent to 530 km3 (130 cu mi) of magma, totaling 1,170 km3 (280 cu mi) of total deposits. The eruption is divided into 10 different phases on the basis of nine mappable fall units and a tenth, poorly preserved but volumetrically dominant fall unit.

The Oruanui eruption shows many unusual features: its episodic nature, wide range of magma-water interaction, and complex interplay of pyroclastic fall and flow deposits. As the eruption occurred through a lake system overlying the vent, many of the deposits contain volcanic ash aggregates. 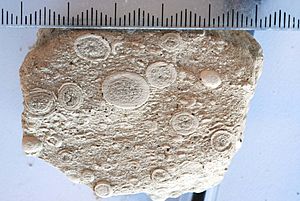 Tephra from the eruption covered much of the central North Island, with ignimbrite up to 200 metres (660 ft) deep. Ashfall affected most of New Zealand, with an ash layer as thick as 18 centimetres (7 in) deposited on the Chatham Islands, 1,000 km (620 mi) away. Later erosion and sedimentation had long-lasting effects on the landscape, and may have caused the Waikato River to shift from the Hauraki Plains to its current course through the Waikato to the Tasman Sea. Less than 22,500 years ago, Lake Taupo, having filled to about 75 m (246 ft) above its current level, cut through its Oruanui ignimbrite dam at a rate which left no terraces around the lake. About 60 km3 (14 cu mi) of water was released, leaving boulders of up to 10 m (33 ft) at least as far down the Waikato River as Mangakino.

All content from Kiddle encyclopedia articles (including the article images and facts) can be freely used under Attribution-ShareAlike license, unless stated otherwise. Cite this article:
Oruanui eruption Facts for Kids. Kiddle Encyclopedia.