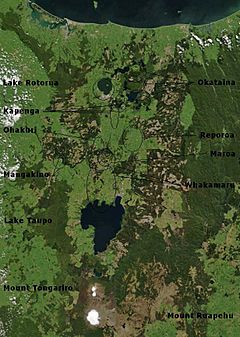 Volcano, lake, and caldera locations in the Taupo Volcanic Zone

Lake Taupo, in the centre of New Zealand’s North Island, is the caldera of a large rhyolitic supervolcano called the Taupo Volcano. This huge volcano has produced two of the world’s most violent eruptions in geologically recent times.

The Taupo Volcano forms part of the Taupo Volcanic Zone, a region of volcanic activity that extends from Ruapehu in the South, through the Taupo and Rotorua districts, to White Island, in the Bay of Plenty region.

Taupo began erupting about 300,000 years ago, but the main eruptions that still affect the surrounding landscape are the Oruanui eruption, about 26,500 years ago, which is responsible for the shape of the modern caldera, and the Hatepe eruption, dated 232 ± 5 CE. However, there have been many more eruptions, with major ones every thousand years or so (see timeline of last 10,000 years of eruptions).

Considering recent history alone, the volcano has been inactive for an unusually long period of time, but considering its long-term activity, it was inactive for much longer between 8100 and 5100 BCE (3,000 year inactivity, compared to the current 1,800 years). Some volcanoes within the Taupo Volcanic Zone have erupted far more recently, however, notably a violent VEI-5 eruption of Mount Tarawera in 1886, and frequent activity of Whakaari/White Island, which erupted most recently in December 2019.

The Taupo Volcano erupts rhyolite, a viscous magma, with a high silica content.

If the magma does not contain much gas, rhyolite tends to just form a lava dome. However, when mixed with gas or steam, rhyolitic eruptions can be extremely violent. The magma froths to form pumice and ash, which is thrown out with great force.

If the volcano creates a stable plume, high in the atmosphere, the pumice and ash are blown sideways, and eventually falls to the ground, draping the landscape like snow.

If the material thrown out cools too rapidly and becomes denser than the air, it cannot rise as high, and suddenly collapses back to the ground, forming a pyroclastic flow, hitting the surface like water from a waterfall, and spreading sideways across the land at enormous speed. When the pumice and ash settles, it is sufficiently hot to stick together as a rock called ignimbrite. Pyroclastic flows can travel hundreds of kilometres an hour.

Earlier ignimbrite eruptions occurred further north than Taupo. Some of these were enormous, and two eruptions around 1.25 and 1.0 million years ago were big enough to generate an ignimbrite sheet that covered the North Island from Auckland to Napier.

While Taupo has been active for 300,000 years, explosive eruptions became more common 65,000 years ago. 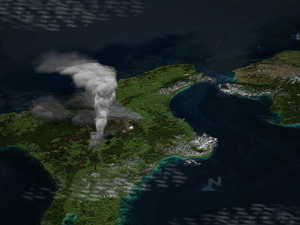 Tephra from the eruption covered much of the central North Island with ignimbrite up to 200 m (660 ft) deep. Most of New Zealand was affected by ashfall, with even an 18 cm (7.1 in) ash layer left on the Chatham Islands, 1,000 km (620 mi)away. Later erosion and sedimentation had long-lasting effects on the landscape, and caused the Waikato River to shift from the Hauraki Plains to its current course through the Waikato to the Tasman Sea. 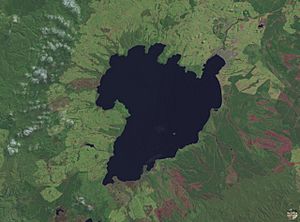 The eruption went through several stages.

The main pyroclastic flow devastated the surrounding area, climbing over 1,500 m (4,900 ft) to overtop the nearby Kaimanawa Ranges and Mount Tongariro, and covering the land within 80 km (50 mi) with ignimbrite from Rotorua to Waiouru. Only Ruapehu was high enough to divert the flow.

The power of the pyroclastic flow was so strong that in some places it eroded more material off the ground surface than it replaced with ignimbrite. Valleys were filled with ignimbrite, evening out the shape of the land.

All vegetation within the area was flattened. Loose pumice and ash deposits formed lahars down all the main rivers.

The eruption further expanded the lake, which had formed after the much larger Oruanui eruption. The previous outlet was blocked, raising the lake 35 m (115 ft) above its present level until it broke out in a huge flood, flowing for more than a week at roughly 200 times the Waikato River's current rate.

Many dates have been given for the Taupo eruption. One estimated date is 181 CE from ice cores in Greenland and Antarctica. It is possible that the meteorological phenomena described by Fan Ye in China and by Herodian in Rome were due to this eruption, which would give a date of exactly 186. However, ash from volcanic activity does not normally cross hemispheres, and radiocarbon dating by R. Sparks has put the date at 233 CE +/- 13 (95% confidence). A 2011 14C wiggle-matching paper gave the date 232 ± 5 CE.

There was no local population at this time, so the nearest humans would have been those in Australia, more than 2,000 km (1,200 mi) to the west.

All content from Kiddle encyclopedia articles (including the article images and facts) can be freely used under Attribution-ShareAlike license, unless stated otherwise. Cite this article:
Taupo Volcano Facts for Kids. Kiddle Encyclopedia.