Whakaari/White Island ( also known as just White Island) is an active andesite stratovolcano situated 48 km (30 mi) from the east coast of the North Island of New Zealand, in the Bay of Plenty. It is New Zealand's most active cone volcano, and has been built up by continuous volcanic activity over the past 150,000 years. The nearest mainland towns are Whakatane and Tauranga. The island has been in a nearly continuous stage of releasing volcanic gas at least since it was sighted by James Cook in 1769. Whakaari erupted continually from December 1975 until September 2000, marking the world's longest historic eruption episode, according to GeoNet, and also in 2012, 2016, and 2019.

The main activities on the island now are guided tours and scientific research. Access to the island is allowed only as a member of a tour run by a registered tour operator.

A large eruption occurred at 14:11 on 9 December 2019, which resulted in fifteen fatalities and many injuries, most suffering severe burns. Forty-seven people were reportedly on the island when it erupted. A second eruption closely followed the first. 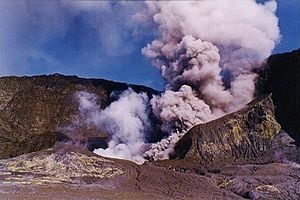 Main vent of Whakaari/White Island in 2000

Whakaari/White Island is part of the Taupo Volcanic Zone. Its eruptions have produced andesite and dacite as lava flows, explosive eruptions of ash, and pyroclastic flows. Its frequent activity and easy access attract scientists and volcanologists as well as many tourists. 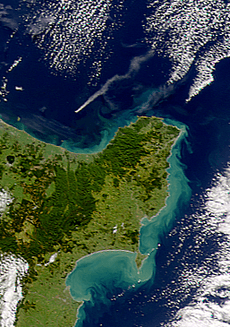 Volcanologists from the GeoNet Project continually monitor the volcano's activity via surveillance cameras. Survey pegs, magnetometers and seismography equipment for early earthquake warnings via radio have also been installed on the crater walls. Since the modern "alert" system was made operational, the island is typically on an alert level rating of 1 or 2 on a scale of 0 to 5; as "Level 2 is the highest alert level before an eruption takes place and indicates 'moderate to heightened volcanic unrest' with the 'potential for eruption hazards.'" The alert level was moved from level 1 to level 2 on 18 November 2019. This volcano is monitored by the Deep Earth Carbon Degassing Project. At most times the volcanic activity is limited to steaming fumaroles and boiling mud.

In March 2000, three small vents appeared in the main crater and began belching ash which covered the island in fine grey powder. An eruption on 27 July 2000 blanketed the island with mud and scoria and a new crater appeared. Major eruptions in 1981–83 altered much of the island's landscape and destroyed the extensive pōhutukawa forest. The large crater created at that time now contains a lake, whose level varies substantially.

Between July and August 2012 the island showed signs of increased activity with lake and gas levels rising from inside the crater. On 5 August 2012 a minor eruption occurred, sending ash into the air. More eruptions have followed since.

Ongoing volcanic activity and tremors on 25 January 2013 suggested another eruption was imminent. A small eruption occurred on 20 August 2013 at 10.23 am, lasting for ten minutes and producing mostly steam. 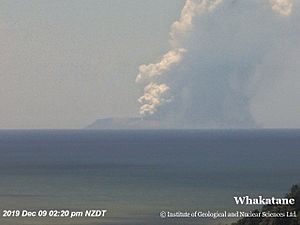 View of the 2019 Whakaari/White Island eruption from Whakatane at 14:20, 9 minutes after the start of the eruption

At 14:11 NZDT on 9 December 2019, Whakaari/White Island erupted. It was reported that there were 47 people on the island when the eruption happened. Fifteen people were killed and a further thirty suffered injuries, many were injured critically. At least two people are still missing. The ongoing seismic and volcanic activity in the area continues to hamper recovery efforts.

Experts identified the event as a phreatic eruption: a release of steam and volcanic gases which caused an explosion, launching rock and ash into the air. 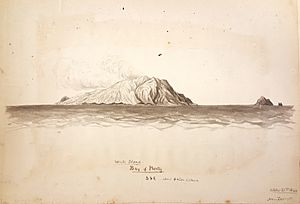 The Māori name Whakaari is recorded in multiple 19th century texts by Europeans, with one mention dating back to 1849, though spelling varied including Wakaari, Whakari, and Whaka ari. The name Whakaari means "to make visible" or "exposed to view". The full Māori name for the island is te puia whakaari, meaning "The Dramatic Volcano".

Whakaari was named "White Island" by Captain Cook on 1 October 1769. According to LINZ this name came from the dense clouds of white steam emanating from it. Alternatively, he may have been alluding to the guano deposits that once covered the island. Although Cook sailed close to the island, he did not record that it was a volcano.

The island's official name was changed from "White Island (Whakaari)" to "Whakaari/White Island" in 1997. This makes it one of many places in New Zealand with dual Māori and English names.

Some Māori myths describe Whakaari as part of Ngātoro-i-rangi's ascent of Tongariro. In one account, he called on his ancestors for warmth; the fire was kindled on Whakaari and brought to him. Other versions of this story are similar but it is his sisters, or the gods, who send him warmth from Whakaari.

Other stories give origin stories for the island. One states that it rose from the deep after the god Maui, having first touched fire was so greatly tortured by the pain that he instantly dived under water to calm his pain; and in the place where he shook the fire from him arose Whakaari. Another tells that Moutohora Island and Whakaari/White Island were peaks in the Huiarau Range near Waikaremoana but were jealous of each other, and rushed towards the ocean, leaving behind them the tracks that now form the Whakatane valley and either the Tauranga or Te Waimana valley. Whakaari was faster, so got to the better position where it stands today. 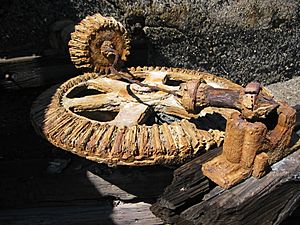 Corroding machinery at old sulphur mine

Attempts were made in the mid-1880s, again from 1898 to 1901, and then from 1913 to 1914, to mine sulphur from Whakaari/White Island, with the island at first being owned by John Wilson. Mining came to a halt in September 1914, when part of the western crater rim collapsed, creating a lahar that killed all 10 workers, who disappeared without trace. Only a camp cat survived, found some days afterwards by the resupply ship and dubbed "Peter the Great".

In 1923, mining was again attempted but, learning from the 1914 disaster, the miners built their huts on a flat part of the island near a gannet colony. Each day they would lower their boat into the sea from a gantry, and row around to the mining factory wharf in Crater Bay. If the sea was rough they had to clamber around the rocks on a very narrow track on the crater's edge.

Before the days of antibiotics, sulphur was used as an antibacterial agent in medicines, in the making of match-heads, and for sterilising wine corks. The sulphur was hauled to the crushing plant in small rail trucks, and a bagging facility was also constructed. However, there was not enough sulphur in the material mined at the island, so the ground-up rock was used as a component of agricultural fertiliser. Mining ended in the 1930s, because of the inadequate mineral content in the fertiliser. The remains of the buildings involved can still be seen, heavily corroded by the sulphuric gases.

The ownership of Whakaari/White Island was one of the first two cases heard by the Native Land Court of New Zealand (now called the Māori Land Court), the other being ownership of nearby Motuhora. Retireti Tapihana (Tapsell) brought the case in 1867, claiming ownership. Retireti was the son of a Danish sailor and a high-ranking Maori woman. Ownership was awarded jointly to Retireti Tapihana and his sister, Katherine Simpkins.

The island is privately owned by the Buttle Family Trust. It was bought by George Raymond Buttle, a stockbroker, in 1936. Buttle later refused to sell it to the government, but agreed in 1952 that it be declared a private scenic reserve.

Whakaari/White Island is one of New Zealand's main breeding colonies for Australasian gannets. There is little vegetation on the island itself, but seaweed grows in the waters around it and gannet parents harvest it to cool off chicks. An ornithologist who visited in 1912 found five species and identified four; in addition to gannets they found red-billed gulls, great-winged petrels, and white-fronted terns.

BirdLife International has declared the island to be an Important Bird Area because of the gannets. 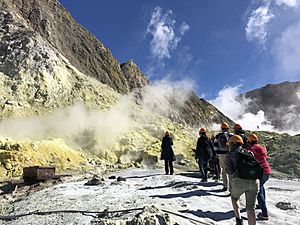 Tourists on the island in April 2019 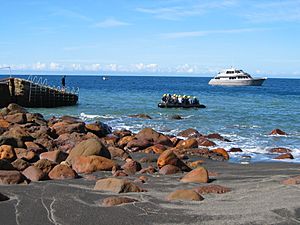 Whakaari/White Island is privately owned. It was declared a private scenic reserve in 1953, and is subject to the provisions of the Reserves Act 1977. Visitors cannot land without permission. However, it is easily accessible by authorised tourist operators.

The waters surrounding the island are well known for their fish stocks. Yellowtail kingfish abound all year, while there is deep-water fishing for hapuka and bluenose (a type of warehou) in the winter. In the summer, blue, black and striped marlin, as well as yellowfin tuna can be caught. A small charter fleet, offering day trips and overnight or longer trips, operates from the nearby port at Whakatane.

All content from Kiddle encyclopedia articles (including the article images and facts) can be freely used under Attribution-ShareAlike license, unless stated otherwise. Cite this article:
Whakaari/White Island Facts for Kids. Kiddle Encyclopedia.