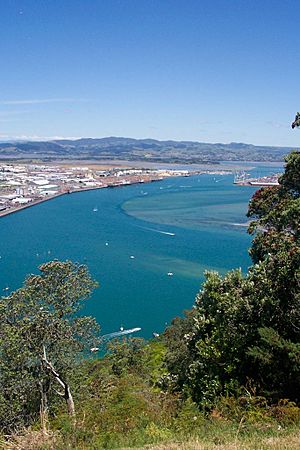 View over Greater Tauranga, taken from the top of Mauao

Tauranga is the most populous city in the Bay of Plenty Region of the North Island of New Zealand. It was settled by Māori late in the 13th century and by Europeans in the early 19th century and was constituted as a city in 1963. Tauranga City is the centre of the fifth largest urban area in New Zealand, with an urban population of 134,400 (June 2016).

The city lies in the north-western corner of the Bay of Plenty, on the south-eastern edge of Tauranga Harbour. The city extends over an area of 168 square kilometres (65 sq mi), and encompasses the communities of Bethlehem, on the south-western outskirts of the city; Greerton, on the southern outskirts of the city; Matua, west of the central city overlooking Tauranga Harbour; Maungatapu; Mount Maunganui, located north of the central city across the harbour facing the Bay of Plenty; Otumoetai; Papamoa, Tauranga's largest suburb, located on the Bay of Plenty; Tauranga City; Tauranga South; and Welcome Bay.

The earliest known settlers were Māori who arrived at Tauranga in the Takitimu and the Mataatua waka in the 13th century.

At 9 am on Friday 23 June 1826 the Herald was the first European ship to enter Tauranga Harbour. The Revd. Henry Williams conducted a Christian service at Otamataha Pā.

In December 1826 and again on March 2007 the Herald travelled to Tauranga from the Bay of Islands to obtain supplies of potatoes, pigs and flax. In 1835 a Church Missionary Society mission station was established at Tauranga by William Wade. Rev. Alfred N. Brown arrived at the CMS mission station in 1838. John Morgan also visited the mission in 1838.

Europeans trading in flax were active in the Bay of Plenty during the 1830s; some were transient, others married local women and settled permanently. The first permanent non-Maori trader was James Farrow, who travelled to Tauranga in 1829, obtaining flax fibre for Australian merchants in exchange for muskets and gunpowder. Farrow acquired a land area of 2,000 square metres (1⁄2 acre) on 10 January 1838 at Otumoetai Pā from the chiefs Tupaea, Tangimoana and Te Omanu, the earliest authenticated land purchase in the Bay of Plenty.

In 1840, a Catholic mission station was established. Bishop Pompallier was given land within the palisades of Otumoetai Pā for a church and a presbytery. The mission station closed in 1863 due to land wars in the Waikato district.

The Tauranga Campaign took place in and around Tauranga from 21 January to 21 June 1864, during the New Zealand Wars. The Battle of Gate Pa is the best known.

The Battle of Gate Pa

The battle of Gate Pā was an attack on the well fortified Pā and its Māori defenders on 29 April 1864 by British forces made up of approximately 300 men of the 43rd Regiment and a naval brigade. It was the single most devastating loss of life suffered by the British military in the whole of the Māori Wars. The British casualties were 31 dead including 10 officers and 80 wounded. The Māori defenders abandoned the Pā during the night with casualties estimated at 25 dead and an unknown number of wounded.

Under the Local Government (Tauranga City Council) Order 2003, Tauranga became legally a city for a second time, from 1 March 2004.

Tauranga is located around a large harbour that extends along the western Bay of Plenty, and is protected by Matakana Island and the extinct volcano of Mauao (Mount Maunganui). Ngamuwahine River is located 19 kilometres southwest of Tauranga.

Situated along a faultline, Tauranga and the Bay of Plenty experience infrequent seismic activity, and there are a few Volcanoes around the area (mainly dormant). The most notable of these are White Island and Mauao, nicknamed "The Mount" by locals.

Tauranga is roughly the antipode of Jaén, Spain.

Tauranga has an oceanic or maritime temperate climate. It can also be described as subtropical due to high summer humidity.

During the summer months the population swells as holidaymakers descend on the city, especially along the popular white coastal surf beaches from Mount Maunganui to Papamoa.

In 1976, Tauranga was a medium-sized urban area, with a population of around 48,000, smaller than Napier or Invercargill. The completion of a harbour bridge in 1988 brought Tauranga and The Mount closer (they amalgamated in 1989) and promoted growth in both parts of the enlarged city. In 1996 Tauranga's population was 82,092 and by 2006 it had reached 103,635.

In 2006, 17.4% of the population was aged 65 or over, compared to 12.3% nationally. The city hosts five major head offices – Port of Tauranga, Zespri International, Ballance Agri-Nutrients Ltd, Trustpower and Craigs Investment Partners (formerly, ABN AMRO Craigs). Tauranga is home to a large number of migrants, especially from the UK, attracted to the area by its climate and quality of life. 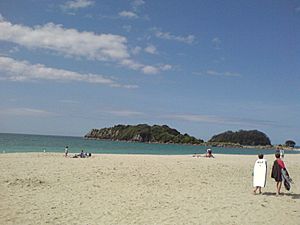 Mount Maunganui Main Beach in winter, with 'Leisure Island' in the background.

A wide variety of faiths are practised, including Christianity, Islam, Buddhism, Hinduism, Sikhism, Taoism and Judaism. There are many denominations of Christianity including Pentecostal, Methodist, Presbyterian, Roman Catholic, Baptist and The Church of Jesus Christ of Latter-day Saints (LDS Church).

The National Jazz Festival takes place in Tauranga every Easter, with dozens of live acts, great food and excellent wine.

New Year celebrations at the Mount in Mount Maunganui are one of Tauranga's main events, bringing people from all around the country.

In 2014 Tauranga City Council granted permission for an annual Sikh parade to celebrate Guru Gobind Singh's birthday. 2500 people took part in 2014, while in 2015, the number increased to 3500. 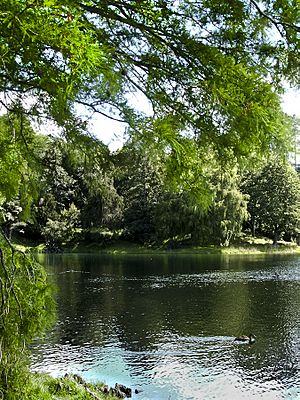 McLaren Falls Park, on the outskirts of Tauranga

Tauranga has a large stadium complex in the Bayfair suburb, Baypark Stadium, rebuilt in 2001 after a similar complex closed in 1995. It hosts Speedway events during summer and rugby matches in winter.

Tauranga is the home to two rowing clubs – Tauranga Rowing Club in Memorial Park and Bay of Plenty Coast Rowing Club at the picturesque Wairoa River. Both clubs have had successful NZ representation over the years.

Tauranga has an all weather outdoor athletics ground at Tauranga Domain.

Greater Tauranga is a very popular lifestyle and tourism destination. It features many natural attractions and scenery ranging from popular beaches and harbour environments to lush bush-clad mountains with waterfalls and lakes. 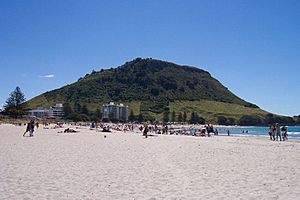 View of Mount Beach, with Mauao in background

Cultural attractions include the Tauranga Art Gallery, which opened in October 2007 and showcases local, national and international exhibitions in a range of media. On the 17th Avenue, the "Historic Village on 17th", recreates a historic setting with original and replica buildings from early Tauranga housing arts and gift shops.

Aviation interests are well served with the Classic Flyers Museum and the Gyrate Flying Club where you can experience flying a modern gyroplane; the "motorbike of the sky".

Tauranga has many parks: one of the largest is Memorial Park, and others include, Yatton Park, Kulim Park, Fergusson Park and the large Tauranga Domain. The Te Puna Quarry Park has become a regional attraction, known for being converted from a disused quarry into a community park.

The coastal suburb Papamoa and neighbouring town Mount Maunganui are some of the more affluent areas around Tauranga. The region's beaches attract swimmers, surfers, kayakers and kitesurfers throughout the year.

Tauranga City Council also has a bit of work under way with their Transportation and Roads strategy. Their aim for the future to change current travel behaviour from a focus on private cars to more sustainable modes such as buses, cycling and walking.

Tauranga Airport is served by several airlines offering flights to Auckland, Wellington and Christchurch as well as some regional destinations within New Zealand. Sunair is based in Tauranga, operating a fleet of light aircraft. Sunair operates from Tauranga Airport to Gisborne, Claris, Whitanga, Motiti Island and North Shore. In addition Barrier Air operates from Tauranga to Claris with a Partenavia P68. 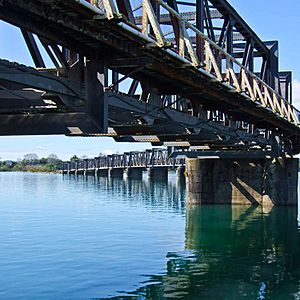 Tauranga is located on the East Coast Main Trunk Railway.

Main transportation in the city is provided by the BayBus, with twelve routes servicing the city's population. Bay Hopper buses depart the central stops in Tauranga's CBD, Mount Maunganui and Greerton half-hourly, with the routes to Mount Maunganui, Papamoa, Greerton and Ohauiti experiencing an increase in frequency during peak hours.

The city is also a waypoint for bus travel between cities, with the Bay Hopper, Intercity, NakedBus and ManaBus performing nationwide commutes on a daily schedule.

All content from Kiddle encyclopedia articles (including the article images and facts) can be freely used under Attribution-ShareAlike license, unless stated otherwise. Cite this article:
Tauranga Facts for Kids. Kiddle Encyclopedia.