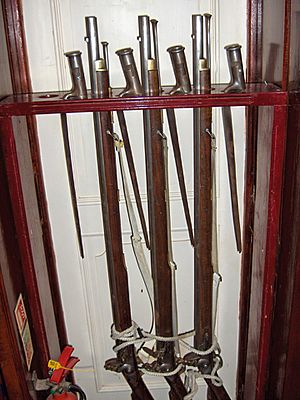 Muskets and bayonets aboard the frigate Grand Turk.

A musket is a muzzleloading, smoothbore firearm, which is meant to be fired from the shoulder.

The musket is the weapon that replaced the arquebus, and was then replaced by the rifle. But the word musket is also used to describe a number of different weapons including:

Muskets were made for use by infantry. A soldier armed with a musket was called a musketman or musketeer. In the 1500's, soldiers armed with a heavy arquebus, called a musket, supported the arquebusiers and the pikemen. By the start of 1700's, a lighter type of musket took over from the arquebus. When the bayonet was added, there was no longer a need for pikemen, and almost all infantry soldiers became musketeers. The first musket made in the united States was the Springfield Model 1795 Musket. In the 1800's, better ammunition and ways of firing the gun, meant that rifling was practical for military use, and the rifled musket became common. A few years later, the use of cartridges, breechloading, and multiple rounds of ammunition meant the "rifled musket" gave way to the rifle, and "muskets" were no longer used.

Musket calibres ranged from 0.5 inches (13 mm) to 0.8 inches (20 mm). A smoothbore musket, firing at a single target, was only accurate to about 50 yards (46 m) to 70 yards (64 m). Rifled muskets in the 1850's were much better, able to hit a man sized target at up to 500 yards (460 m). The advantage of this longer distance was shown at the Battle of Four Lakes, where Springfield Model 1855 rifled muskets killed Indian warriors before they could get close enough with their smoothbore muskets. However, in the Italian War of 1859, French forces were able to defeat the longer range of Austrian rifle muskets by quick, small attacks and bayonet attacks at close range.

All content from Kiddle encyclopedia articles (including the article images and facts) can be freely used under Attribution-ShareAlike license, unless stated otherwise. Cite this article:
Musket Facts for Kids. Kiddle Encyclopedia.