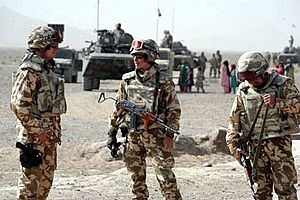 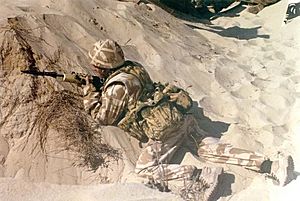 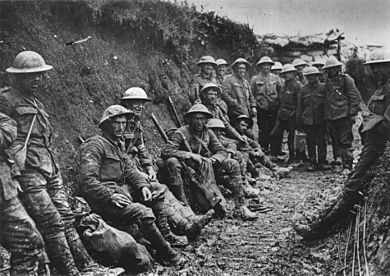 Infantry is the branch of an army that engages in military combat on foot, distinguished from cavalry, artillery, and tank forces. Also known as foot soldiers, infantry traditionally relies on moving by foot between combats as well, but may also use mounts, military vehicles, or other transport. Infantry make up a large portion of all armed forces in most nations, and typically bear the largest brunt in warfare, as measured by casualties, deprivation, or physical and psychological stress.

The first military forces in history were infantry. In antiquity, infantry were armed with a early melee weapon such as a spear, axe or sword, or an early ranged weapon like a javelin, sling, or bow, with a few infantrymen having both a melee and a ranged weapon. With the development of gunpowder, infantry began converting to primarily firearms. By the time of Napoleonic warfare, infantry, cavalry, and artillery formed a basic triad of ground forces, though infantry usually remained the most numerous. With armoured warfare, armoured fighting vehicles have replaced the horses of cavalry, and airpower has added a new dimension to ground combat, but infantry remains pivotal to all modern combined arms operations. 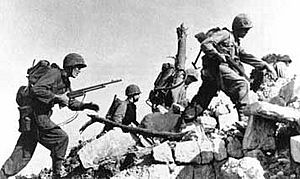 Infantrymen of the US 6th Marine Division search the ruins of Naha, Okinawa for Japanese snipers, Spring 1945

Infantry have much greater local situational awareness than other military forces, due to their inherent intimate contact with the battlefield ("boots on the ground"); this is vital for taking or holding ground (any military objectives), securing battlefield victories, maintaining military area control and security both at and behind the front lines, for capturing ordnance or materiel, taking prisoners, and military occupation.

Infantry can more easily recognise, adapt and respond to local conditions, weather, and changing enemy weapons or tactics. They can operate in a wide range of terrain inaccessible to military vehicles, and can operate with a lower logistical burden. Infantry are most easily deliverable forces to ground combat areas, by simple and reliable marching, or by trucks, sea or air transport; they can also be inserted directly into combat by amphibious landing, or for air assault by parachute or helicopter ("airmobile" or "airborne" infantry). They can be augmented with a variety of crew-served weapons and armored personnel carriers. 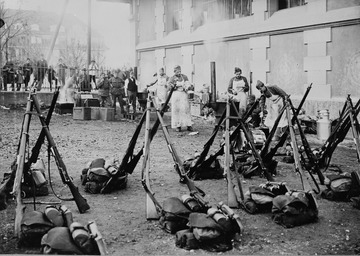 Swiss infantry kits arrayed in front of a field kitchen in Spitalacker, Bern during a workers' strike, c. 1918

An infantryman's equipment is of vital concern both for the man and the military. The needs of the infantryman to maintain fitness and effectiveness must be constantly balanced against being overburdened. While soldiers in other military branches can use their mount or vehicle for carrying equipment, and tend to operate together as crews serving their vehicle or ordnance, infantrymen must operate more independently; each infantrymen usually have much more personal equipment to use and carry. This encourages searching for ingenious combinations of effective, rugged, serviceable and adaptable, yet light, compact, and handy infantry equipment.

Beyond their main arms and armour, each infantryman's "military kit" includes combat boots, battledress or combat uniform, camping gear, heavy weather gear, survival gear, secondary weapons and ammunition, weapon service and repair kits, health and hygiene items, mess kit, rations, filled water canteen, and all other consumables each infantryman needs for the expected duration of time operating away from their unit's base, plus any special mission-specific equipment. One of the most valuable pieces of gear is the entrenching tool—basically a folding spade—which can be employed not only to dig important defenses, but also in a variety of other daily tasks, and even sometimes as a weapon.

Infantry typically have shared equipment on top of this, like tents or heavy weapons, where the carrying burden is spread across several infantrymen. In all, this can reach 25–45 kg (60–100 lb) for each soldier on the march. Such heavy infantry burdens have changed little over centuries of warfare; in the late Roman Republic, legionaries were nicknamed Marius' mules as their main activity seemed to be carrying the weight of their legion around on their backs. 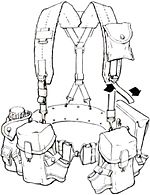 When combat is expected, infantry typically switch to "packing light", meaning reducing their equipment to weapons, ammo, and bare essentials, and leaving the rest with their transport, at camp or rally point, in temporary hidden caches, or even (in emergencies) discarding whatever may slow them down. Additional specialised equipment may be required, depending on the mission or to the particular terrain or environment, including satchel charges, demolition tools, mines, barbed wire, carried by the infantry or attached specialists.

Historically, infantry have suffered high casualty rates from disease, exposure, exhaustion and privation — often in excess of the casualties suffered from enemy attacks. Better infantry equipment to support their health, energy, and protect from environmental factors greatly reduces these rates of loss, and increase their level of effective action. Health, energy, and morale are greatly influenced by how the soldier is fed, so militaries often standardized field rations, starting from hardtack, to US K-rations, to modern MREs.

Communications gear has become a necessity, as it allows effective command of infantry units over greater distances, and communication with artillery and other support units. Modern infantry can have GPS, encrypted individual communications equipment, surveillance and night vision equipment, advanced intelligence and other high-tech mission-unique aids.

Armies have sought to improve and standardise infantry gear to reduce fatigue for extended carrying, increase freedom of movement, accessibility, and compatibility with other carried gear, such as the US All-purpose Lightweight Individual Carrying Equipment (ALICE).

As a branch of the armed forces, the role of the infantry in warfare is to engage, fight, and kill the enemy at close range—using either a firearm (rifle, pistol, machine gun), an edged-weapon (knife, bayonet), or bare hands (close quarters combat)—as required by the mission to hand; thus 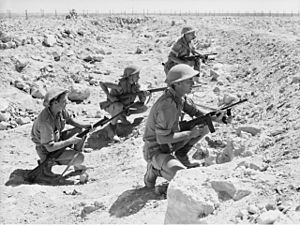 Beginning with the Napoleonic Wars of the early 19th century, artillery has become an increasingly dominant force on the battlefield. Since World War I, combat aircraft and armoured vehicles have also become dominant. However, the most effective method for locating all enemy forces on a battlefield is still the infantry patrol, and it is the presence or absence of infantry that ultimately determines whether a particular piece of ground has been captured or held. 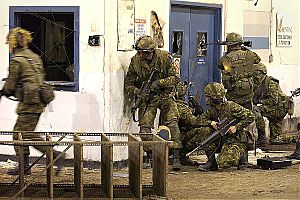 Attack operations are the most basic role of the infantry, and along with defense, form the main stances of the infantry on the battlefield. Traditionally, in an open battle, or meeting engagement, two armies would manoeuver to contact, at which point they would form up their infantry and other units opposite each other. Then one or both would advance and attempt to defeat the enemy force. The goal of an attack remains the same: to advance into an enemy-held objective, most frequently a hill, river crossing, city or other dominant terrain feature, and dislodge the enemy, thereby establishing control of the objective. 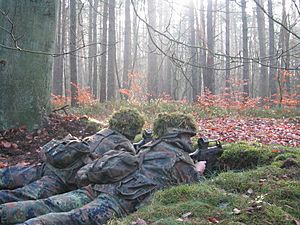 Because of an infantryman's duties with firearms, explosives, physical and emotional stress, and physical violence, casualties and deaths are not uncommon in both war and in peacetime training or operations. It is a highly dangerous and demanding combat service; in World War II, military doctors concluded that even physically unwounded soldiers were psychologically worn out after about 200 days of combat.

The physical, mental, and environmental operating demands of the infantryman are high. All of the combat necessities such as ammunition, weapon systems, food, water, clothing, and shelter are carried on the backs of the infantrymen, at least in light role as opposed to mounted/mechanised. Combat loads of over 36 kg (80 lbs) are standard, and greater loads in excess of 45 kg (100 lbs) are very common. These heavy loads, combined with long foot patrols of over 40 km (25 mi) a day, in any climate from 43 to −29 °C (109 to −20 °F) in temperature, require the infantryman to be in good physical and mental condition. Infantrymen live, fight and die outdoors in all types of brutal climates, often with no physical shelter. Poor climate conditions adds misery to this already demanding existence. Disease epidemics, frostbite, heat stroke, trench foot, insect and wild animal bites are common along with stress disorders and these have sometimes caused more casualties than enemy action.

Infantrymen are expected to continue with their combat missions despite the death and injury of friends, fear, despair, fatigue, and bodily injury. 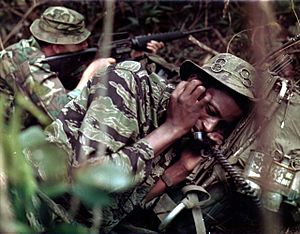 Foreign and domestic militaries typically have a slang term for their infantrymen. In the U.S. military, the slang term among both Marine and Army infantrymen for themselves is "grunt." In the British Army, they are the "squaddies." The infantry is a small close-knit community, and the slang names are terms of endearment that convey mutual respect and shared experiences.

All content from Kiddle encyclopedia articles (including the article images and facts) can be freely used under Attribution-ShareAlike license, unless stated otherwise. Cite this article:
Infantry Facts for Kids. Kiddle Encyclopedia.