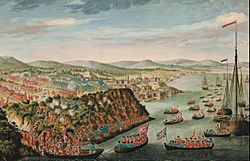 Amphibious warfare is a type of offensive military operation that today uses naval ships to project ground and air power onto a hostile or potentially hostile shore at a designated landing beach. Through history the operations were conducted using ship's boats as the primary method of delivering troops to shore. Since the Gallipoli Campaign, specialised watercraft were increasingly designed for landing troops, matériel and vehicles, including by landing craft and for insertion of commandos, by fast patrol boats, zodiacs (rigid inflatable boats) and from mini-submersibles.

The term amphibious first emerged in the United Kingdom and the United States during the 1930s with introduction of vehicles such as Vickers-Carden-Loyd Light Amphibious Tank or the Landing Vehicle Tracked.

Amphibious warfare includes operations defined by their type, purpose, scale and means of execution. In the British Empire at the time these were called combined operations which were defined as "...operations where naval, military or air forces in any combination are co-operating with each other, working independently under their respective commanders, but with a common strategic object." All armed forces that employ troops with special training and equipment for conducting landings from naval vessels to shore agree to this definition.

Since the 20th century an amphibious landing of troops on a beachhead is acknowledged as the most complex of all military maneuvers. The undertaking requires an intricate coordination of numerous military specialties, including air power, naval gunfire, naval transport, logistical planning, specialized equipment, land warfare, tactics, and extensive training in the nuances of this maneuver for all personnel involved.

All content from Kiddle encyclopedia articles (including the article images and facts) can be freely used under Attribution-ShareAlike license, unless stated otherwise. Cite this article:
Amphibious warfare Facts for Kids. Kiddle Encyclopedia.