The Dieppe Raid is also known as the Battle of Dieppe, Operation Rutter and, later, Operation Jubilee. It was a Second World War Allied attack on the German-occupied port of Dieppe. The attack took place on the northern coast of France on 19 August 1942.

The attack began at 5:00 a.m. and by 10:50 a.m. the Allied commanders had to call a retreat. Over 6,000 infantrymen, mostly Canadian, were supported by a Canadian Armoured regiment. They were also helped by a strong force of Royal Navy and smaller Royal Air Force group.

The goal was to capture a major port for a short period and to gather information. Upon retreat, the Allies also wanted to destroy coastal defences, port structures and important buildings. The raid was also intended to improve morale and demonstrate the commitment of the United Kingdom to attack a Western front in Europe.

None of these goals were achieved. There was not enough Allied artillery support. The troops were trapped on the beach by obstacles and German gunfire. After less than 10 hours since the first landings, the last Allied troops had all been either killed, evacuated, or captured by the Germans.

Instead of showing the British commitment, the terrible number of Allied deaths showed that the Allies were not ready to invade France for a long time. The attack did help the Allies to gather some information.

A total of 3,623 of the 6,086 men (almost 60%) who went ashore were either killed, wounded, or captured. The Royal Air Force did not get the Luftwaffe to start a battle. The RAF lost 96 aircraft (at least 32 to being shot down or accidents), compared to 48 lost by the Luftwaffe.

The Royal Navy lost 33 landing craft and one destroyer. The events at Dieppe affected the plans for the North African (Operation Torch) and Normandy landings (Operation Overlord).

The British decided the Dieppe attack could be planned within a month. They were very careful to keep the attack secret. No records were kept of the plans.

After the evacuation of the British Expeditionary Forces from Dunkirk in May 1940, the British started to plan an attack force. It would use new ways of doing sea landings on beaches (amphibious warfare).

Dieppe, a coastal town in France, is built along a long cliff by the English Channel. In 1942, the Germans set up two large artillery batteries at Berneval-le-Grand and Varengeville. One important consideration for the British planners was that Dieppe was within range of the Royal Air Force's fighter aircraft.

There was also pressure from the Soviet government to attack the Germans in Western Europe. By early 1942, The Wehrmacht's Operation Barbarossa attacks did not destroy the Soviet Union.

However, the Germans moved into southern Soviet territory, pushing toward Stalingrad. Joseph Stalin demanded that the Allies attack in France to force the Germans to move 40 divisions away from the Eastern Front. This would make the fighting less hard for the Red Army.

The Dieppe raid was a major attack planned by Vice-Admiral Lord Mountbatten.

The attacking force would consist of 5,000 Canadians, 1,000 British troops, and 50 United States Rangers.

It was originally planned in April 1942 and code named Operation Rutter. The Allies planned to do a major attack on a German-held port on the French coast and to hold it for two tides. They would destroy enemy buildings and defences before withdrawing.

The Canadian government wanted that Canadian troops to do some fighting. The 2nd Canadian Infantry Division, commanded by Major General John Hamilton Roberts, was selected for the main force. The plan called for an attack, without any heavy air bombing.

The lack of enough bombing was one of the main reasons for the attack's failure. Some people think that air and naval bombing was not done to limit casualties of French civilians in the port.

The Dieppe landings were planned on six beaches. Four were in front of the town, and two to the eastern and western sides. 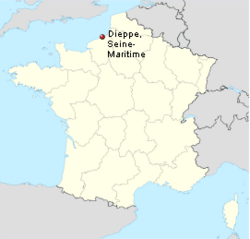 Armoured support was provided by the 14th Army Tank Regiment (The Calgary Regiment (Tank)). 58 of the new Churchill tanks would be sent ashore using the new landing craft tank (LCT). In addition, three of the Churchills had flame-throwers and all could operate in the shallow water near the beach.

The Royal Navy would supply 237 ships and landing craft. However, pre-landing naval gunfire support was limited, consisting of six Hunt-class destroyers with 4-inch guns. The Royal Air Force would supply 74 squadrons of aircraft, of which 66 were fighter squadrons.

There was not much information about the beaches. There were German gun positions on the cliffs, but these had not been spotted. The planners thought that Dieppe is not heavily defended and that the beaches in are suitable for landing infantry, and armoured fighting vehicles. 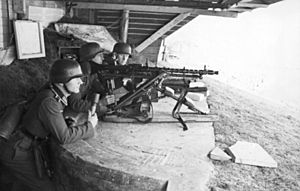 The German forces at Dieppe were ready for the attack. They were warned by French double agents that the British were planning some action in the area. They had also detected increased radio talk and landing craft being gathered together in the southern British coastal ports.

Dieppe and the cliffs were well defended. The 1,500 troops were placed along the beaches of Dieppe and the nearby towns, covering all the likely landing places.

The Germans had machine guns, mortars and artillery. The city and port was protected.

The Allied fleet left the south coast of England on the night of 18 August 1942. The Canadians left from the Port of Newhaven. The fleet of eight destroyers and motor gun boats to protect the landing craft and motor launches were preceded by minesweepers that cleared paths through the English Channel for them.

The initial landings began at 04:50 on 19 August. There were attacks on the two artillery batteries on the sides of the main landing area.

On their way in, the landing craft and escorts heading towards Puys and Berneval ran into a small German group of ships and exchanged fire at 03:48. 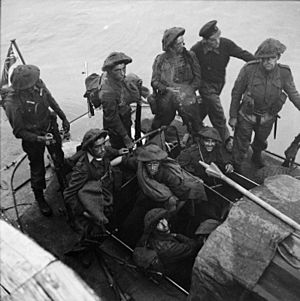 No. 3 Commando men who unlike No. 4 Commando wore steel helmets during the raid.

The goal for Lieutenant Colonel John Durnford-Slater and No. 3 Commando was to do two landings 8 miles (13 km) east of Dieppe to destroy the coastal artillery battery near Berneval. The battery could fire upon the landing at Dieppe 4 miles (6.4 km) to the west.

The craft carrying No. 3 Commando approached the coast to the east. They were not warned of the approach of a German convoy that had been found by British "Chain Home" radar stations at 21:30.

German S-boats escorting a German tanker torpedoed some of the landing craft and damaged the escorting Steam Gun Boat 5.

Motor Launch 346 and Landing Craft Flak 1 fired on the German boats. The group got spread out, with some losses, and the enemy's coastal defences were alerted. 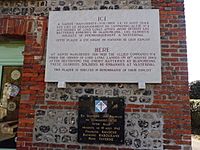 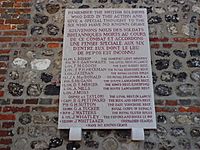 Dieppe Raid 1942, nearby plaque for the British soldiers killed

The goal for Lieutenant Colonel Lord Lovat and No. 4 Commando (including 50 United States Army Rangers) was to do two landings 6 miles (9.7 km) west of Dieppe. They had to destroy the coastal artillery battery Hess at Blancmesnil-Sainte-Marguerite. Landing on the right side, they climbed the hill and attacked. They destroyed the artillery battery of six 150 mm guns. This was the only success of Operation Jubilee. The commando then withdrew at 07:30 as planned.

Most of No. 4 returned to England. This part of the raid was seen as a good example of how the Royal Marine Commando should attack during landings. Lord Lovat was awarded the Distinguished Service Order, and Captain Patrick Porteous No. 4 Commando, was awarded the Victoria Cross. 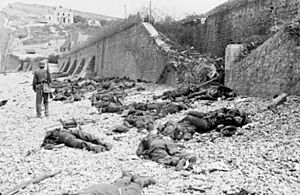 Canadian dead on Blue beach at Puys. Trapped between the beach and high sea wall (fortified with barbed wire), they made easy targets for MG34 machine guns in a German bunker. The bunker firing slit is visible in the distance, just above the German soldier's head.

The naval battle between the small German convoy and the craft carrying No. 3 Commando had made the German defenders at Blue beach aware of the attack. The landing near Puys by the Royal Regiment of Canada plus three platoons from the Black Watch of Canada and an artillery group was ordered to destroy machine gun and artillery batteries protecting the Dieppe beach.

They were delayed by 20 minutes and the smoke that should have hidden their attack had lifted. The Germans were ready in their defensive positions for the landings. The well-fortified German forces fired guns at the Canadian forces that did land on the beach.

As soon as they reached the shore, the Canadians found themselves unable to move forward. The Royal Regiment of Canada had many deaths. Of the 556 men in the regiment, 200 were killed and 264 captured.

On Green beach at the same time that No. 4 Commando had landed, the South Saskatchewan Regiment went towards Pourville. They landed at 04:52 without being detected. The regiment managed to leave their landing craft before the Germans could start firing their guns.

The regiment had to enter Pourville to cross the river by the only bridge. Before they managed to reach the bridge, the Germans had put machine guns and anti-tank guns there which stopped them. With dead and wounded Canadians lying on the bridge, Lieutenant Colonel Charles Cecil Ingersoll Merritt, the commanding officer, crossed the bridge several times. He wanted to show his soldiers that the bridge could be crossed. Lieutenant Colonel Merritt was awarded the Victoria Cross. 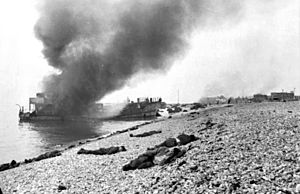 Destroyed landing craft on fire with Canadian dead on the beach. A concrete gun emplacement on the right covers the whole beach. The steep beach can clearly be seen.

One of the goals of the Dieppe Raid was to discover the technology of a German radar station.

RAF Flight Sergeant Jack Nissenthall, a radar specialist, was to attempt to enter the radar station and learn its secrets. If he were about to be captured, the soldiers with him had to kill him. He knew a lot of secrets about Allied radar. He also carried a cyanide pill to take if he was captured.

Nissenthall and his men could not enter the radar station due to strong German defences. Nissenthall did cut all telephone wires.

All content from Kiddle encyclopedia articles (including the article images and facts) can be freely used under Attribution-ShareAlike license, unless stated otherwise. Cite this article:
Dieppe Raid Facts for Kids. Kiddle Encyclopedia.