The Commander-in-Chief of the Kriegsmarine (as for all branches of armed forces during the period of absolute Nazi power) was the "Führer" Adolf Hitler, who exercised his authority through the Oberkommando der Marine (High Command of the Navy). 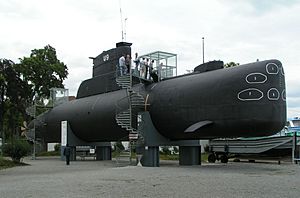 The Kriegsmarine was developed during the German naval rearmament of the 1930s. The Treaty of Versailles had limited the size of the German navy after World War I. It also prevented Germany from building submarines. But by 1934 Germany had secretly stockpiled most of the parts they needed to construct submarines (called U-boats).

In early 1935 Hitler ordered the U-boats to be built. In January 1939 Plan Z was ordered, calling for the construction of many naval vessels. The ships of the Kriegsmarine fought during the Spanish Civil War and World War II. The commander of the Kriegsmarine was Karl Dönitz. 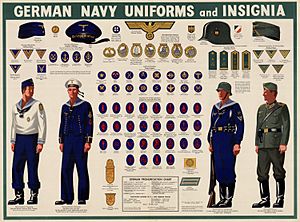 The Kriegsmarine's most famous ships were the U-boats. Most of them were built after Plan Z was abandoned at the beginning of World War II. Wolfpacks were groups of submarines that attacked British convoys. Most of the attacks were during the first half of the Battle of the Atlantic.

Along with the U-boats, commerce raiders and cruisers were used to disrupt Allied shipping in the early years of the war. The most famous of these were the heavy cruisers Admiral Graf Spee and Admiral Scheer and the battleship Bismarck.

After the Second World War in 1945, the Kriegsmarine's remaining ships were divided up among the Allied powers and were used for various purposes including minesweeping.

All content from Kiddle encyclopedia articles (including the article images and facts) can be freely used under Attribution-ShareAlike license, unless stated otherwise. Cite this article:
Kriegsmarine Facts for Kids. Kiddle Encyclopedia.