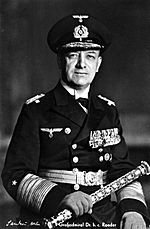 Erich Johann Albert Raeder (24 April 1876 in Wandsbek - 6 November 1960 in Kiel) was a naval leader in Germany before and during the Second World War. He was made a "Großadmiral" (English: Grand Admiral, equivalent to Admiral of the Fleet) in 1939, which is the highest naval rank. In 1943 he was replaced by Karl Dönitz in his position as head of the German Navy.

Raeder was also one of the 24 charged at the Nuremberg Trials, and was sent to prison.

All content from Kiddle encyclopedia articles (including the article images and facts) can be freely used under Attribution-ShareAlike license, unless stated otherwise. Cite this article:
Erich Raeder Facts for Kids. Kiddle Encyclopedia.