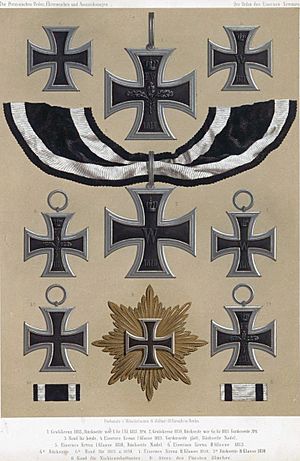 The Iron Cross was a medal given to German soldiers for bravery during wartime. The award was created by King Frederick William III of Prussia. It was first given out on 10 March 1813. The Iron Cross was awarded during the Napoleonic Wars, the Franco-Prussian War, the First World War, and the Second World War. This medal was received by Adolf Hitler after World War I.

The medal is only given in wartime, so no Iron Crosses have been given out since the end of the Second World War in 1945. The Iron Cross 1st Class was a pin-on medal with no ribbon and was worn centered on a uniform breast pocket, either on dress uniforms or everyday outfit. It was a progressive award, with the second class having to be earned before the first class and so on for the higher degrees.

It is estimated that some four and a half million 2nd Class Iron Crosses were awarded during World War II, and 300,000 of the 1st Class. Two Iron Cross 1st Class recipients were women, one of whom was test pilot Hanna Reitsch.

Knight's Cross of the Iron Cross

All content from Kiddle encyclopedia articles (including the article images and facts) can be freely used under Attribution-ShareAlike license, unless stated otherwise. Cite this article:
Iron Cross Facts for Kids. Kiddle Encyclopedia.