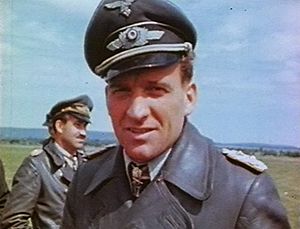 Hans-Ulrich Rudel after his capture in 1945

Oberst (Colonel) Hans-Ulrich Rudel (2 July 1916 in Konradswaldau – 18 December 1982 in Rosenheim) was a Stuka dive bomber pilot on the eastern front during World War II. He was the most highly decorated German serviceman of the war.

After the war he went to South America and helped organize Nazi refugees.

All content from Kiddle encyclopedia articles (including the article images and facts) can be freely used under Attribution-ShareAlike license, unless stated otherwise. Cite this article:
Hans-Ulrich Rudel Facts for Kids. Kiddle Encyclopedia.