Battle of Stalingrad facts for kids

The Battle of Stalingrad was fought during the Second World War between Nazi Germany and the Soviet Union. They were fighting for control of the city of Stalingrad. The battle was fought between 17 July 1942 and 2 February 1943.

It was one of the most important battles of the war because it marked the end of Germany's advances. Hitler even blamed his defeat partly on Stalingrad.

The Battle of Stalingrad has often been recorded as an example of how brutal a war can be. It is reported that, due to limited supplies, soldiers and civilians had to resort to eating rats and mice.

Hitler also wanted to capture Stalingrad because it was named after Joseph Stalin, the leader of the Soviet Union, thus it would embarrass him.

In June 1942, Adolf Hitler launched an attack in southern Russia. By the end of July the German army had reached Stalingrad. With bombs and fire the German Luftwaffe turned the city into ruins. However, the rubble made hiding places from which Russian snipers could attack the Germans. Hitler and Stalin sent in large numbers of soldiers. They both ordered that anyone who retreated would be shot on the spot for treason.

On 19 November 1942, the Red Army launched an attack which surrounded the Stalingrad area. Hitler ordered the army to stay there. The German air force tried to supply them by air. By February 1943, the German forces in Stalingrad had no ammunition and food. Rather than freeze, they surrendered.

The battle lasted five months, one week, and three days. About 2 million people dead or wounded in battle were reported. There were more Russian deaths than German, but it was a victory for the Russians. They had killed so many Germans that Hitler's overall plan to conquer the Soviet Union, started with Operation Barbarossa, was seriously weakened. Also, the Germans failed to get control of Russian oil fields.

Part of the German army were Russian volunteers called HIWIs.

Interesting facts about the Battle of Stalingrad 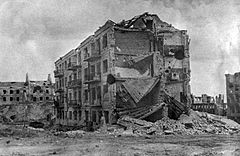 This bomb-damaged apartment was called Pavlov's house. In this building, about two dozen Russian soldiers defended against the Germans for two months.

All content from Kiddle encyclopedia articles (including the article images and facts) can be freely used under Attribution-ShareAlike license, unless stated otherwise. Cite this article:
Battle of Stalingrad Facts for Kids. Kiddle Encyclopedia.