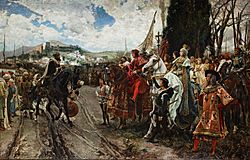 Muslims surrender to Spain: Boabdil gives the Granada key to Ferdinand and Isabella

Surrender is when soldiers, nations or other combatants stop fighting and eventually become prisoners of war or POW, either as individuals or when ordered to by their officers. A white flag is a common symbol of surrender.

All content from Kiddle encyclopedia articles (including the article images and facts) can be freely used under Attribution-ShareAlike license, unless stated otherwise. Cite this article:
Surrender (military) Facts for Kids. Kiddle Encyclopedia.