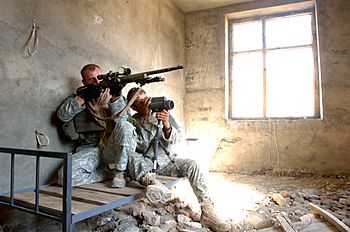 A sniper is a person who is trained to shoot perfectly at things that are very small or very far away. The sniper's target is usually an enemy. Many military snipers get special training to use a sniper rifle, a special type of gun. Most sniper rifles have a telescope called a sniper scope to help the sniper see the target. Snipers are also trained to be stealthy. Snipers hide or use military camouflage such as a ghillie suit that looks like (and may include some of) the surrounding foliage so that it is hard for the enemy to see them. A sniper is also called a "marksman".

A sniper uses a special kind of rifle called a sniper rifle. This rifle is much more accurate than normal rifles. Almost all sniper rifles use a Sniper scope, a special telescope that allows them to see targets very far away. There are two different kinds of sniper rifles: bolt action rifles, which fire a single shot and then the user must ready the next shot, and semi-automatic ("semi-auto") rifles which fire a single shot each time the trigger is pulled.

Some snipers are famous for having killed hundreds of enemy soldiers. One such sniper is U.S. Marine Corps sniper Carlos Hathcock, who was famous in the Vietnam War for wearing a white feather in his hat. Other snipers are famous for being able to kill an enemy from very far away. Carlos Hathcock held the record for the furthest distance kill for a very long time – his farthest was over 2,500 yards (2,286 m). However, in the Afghanistan War, snipers from the Canadian Army broke the record with a shot of 2,430 metres (2,660 yd). Other snipers are known for difficult shots. For example, Matt Hughes had to make a 860 metres (2,822 ft) shot in very high winds by aiming over 56 feet (17 m) to the left of the enemy. An example of a famous sniper in WWII is Vasily Zaytsev. He supposedly killed 225 enemy soldiers during the Battle of Stalingrad.