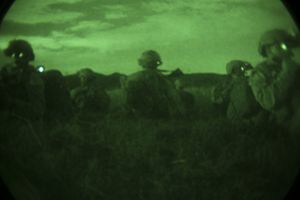 Reconnaissance, sometimes called scouting, is the act of exploring to gain military information. Often referred to as recce (UK, Canada and Australia, pronounced /ˈrɛki/) or recon (U.S., pronounced /ˈriːkɒn/), the associated formal verb is reconnoitre (British spelling) or reconnoiter (American spelling). In informal English, both recce and recon are often also used as a verb. The term is sometimes used in non military contexts.

Often, units sent out for reconnaissance are armed only for self-defense. They rely on stealth to gather information. Others are well-enough armed to also deny information to the enemy by fighting and or destroying their reconnaissance parties.

Reconnaissance-in-force (RIF) is a method of probing an enemy's position. An attack, even with a small force, may get a strong reaction by the enemy. Hopefully that reveals the enemy's strength, deployment, and other tactical information. The RIF commander can fall back with the information or expand the conflict into a full engagement. Other methods consist of hit-and-run tactics using moving very fast. In some cases light-armored vehicles are used for added fire superiority, as the need arises.

All content from Kiddle encyclopedia articles (including the article images and facts) can be freely used under Attribution-ShareAlike license, unless stated otherwise. Cite this article:
Reconnaissance Facts for Kids. Kiddle Encyclopedia.