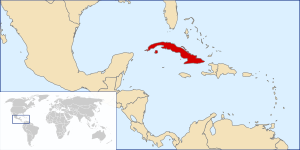 The Cuban Missile Crisis was a time of heightened confrontation between the Soviet Union, the United States, and Cuba during the Cold War. In Russia, it is known as the Caribbean Crisis (Russian: Карибский кризис, Karibskiy krizis). Cuba calls it the October Crisis. It was a proxy conflict around Cuba.

It began when the Soviet Union (USSR) began building missile sites in Cuba in 1962. Together with the earlier Berlin Blockade, this crisis is seen as one of the most important confrontations of the Cold War. It may have been the moment when the Cold War came closest to a nuclear war.

There was a coup in Cuba in 1959. A small group led by Fidel Castro took power in this Cuban Revolution. The new government took over American businesses. The American government refused to import anything from Cuba after that. The US embargo against Cuba began February 7, 1962. In 1962, the American government was worried that the USSR would attack America from Cuba, because Cuba is near enough that the missiles could reach almost any city in America. Cuba was seen by the US as a communist country, like the Soviet Union.

In October 1962, American ships blocked Soviet ships carrying missiles from going into Cuba. The Soviets and Cubans agreed to take away the missiles if America promised not to attack Cuba. During the Cuban Missile Crisis, the Kennedy administration secretly agreed to remove the Jupiter missiles from Turkey in exchange for the withdrawal of all Russian nuclear weapons from Cuba. 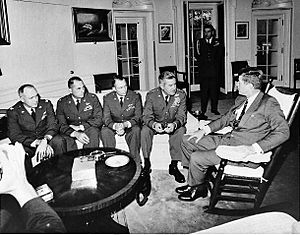 The Americans feared that the Soviet Union would expand communism or socialism. The US and the USSR were the main parties in the Cold War that began in 1945. The US did not want a country in the Caribbean to be openly allied with the USSR. That would also make the Monroe Doctrine useless, which kept powers in Europe from getting involved in South America.

The US had been embarrassed publicly by the failed Bay of Pigs Invasion in April 1961, which had been launched under President John F. Kennedy by CIA-trained forces of Cuban exiles. Afterward, former President Dwight D. Eisenhower told Kennedy that "the failure of the Bay of Pigs will embolden the Soviets to do something that they would otherwise not do".

The half-hearted Bay of Pigs invasion left Soviet premier Nikita Khrushchev and his advisers with the impression that Kennedy was indecisive and, as one Soviet adviser wrote, "too young, intellectual, not prepared well for decision making in crisis situations... too intelligent and too weak".

In late 1961, Kennedy launched a number of covert operations against Castro's government. Named Operation Mongoose, they were unsuccessful. In February 1962, the US launched an economic embargo against Cuba.

In September 1961, the Cuban government thought the US would invade because of a resolution by the US Congress to allow military force if the interests of the US in Cuba were threatened. The US also announced a military exercise in the Caribbean to be held the following month.

Castro and Soviet premier Nikita Khrushchev agreed to place secret strategic nuclear missiles in Cuba in case the US invaded. Like Castro, Khrushchev thought that the US would invade Cuba soon. If Cuba were to stop being a Communist country it would hurt Khrushchev's reputation around the world, especially in Latin America. He said that he wanted to confront the Americans "with more than words.... the logical answer was missiles".

Tensions were at their highest from October 8, 1962. On October 14, United States reconnaissance saw the missile bases being built in Cuba. The crisis ended two weeks later on October 28, 1962, when the President of the United States John F. Kennedy and the United Nations Secretary-General U Thant reached an agreement with the USSR to destroy the missiles in Cuba if the US agreed to avoid invading Cuba. Khrushchev wanted the Jupiter and Thor missiles in Turkey to be removed. The US removed them but forced Khrushchev to keep that a secret. 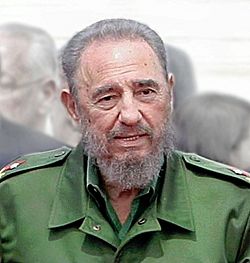 In Cuba, Fidel Castro took power from General Batista on January 1, 1959. From 1952 to 1959, Batista was a military dictator in Cuba, very right-wing with Mafia connections & the support of the Eisenhower administration. The United States was interested in Cuba because of the many businesses that they had there, even though the country was a dictatorship. The countries were also military friends. This was shown by the US base at Guantánamo Bay.

When Castro came to power in Cuba, he nationalized American companies in Cuba, meaning he took the private property from those companies and made it the property of Cuba, to use as Castro decided. The United States decided to break off economic relations with Cuba (which means that they would stop buying things from them). They stopped American foreign aid going to Cuba, and stopped buying Cuban sugar (which was Cuba's main export). This was a disaster for Castro, because America bought the most Cuban sugar. However, Russia saved the Cuban economy by buying Cuban sugar for high prices.

Castro turned to the USSR, a great power. He signed a contract with Nikita Khrushchev, the Russian chairman at the time. The contract said that the USSR would buy 1 million tons of Cuban sugar per year, in exchange for Castro's Communist support; he declared himself a Marxist-Leninist on December 2, 1961.

The reasons that Khrushchev wanted to help Cuba were:

The Bay of Pigs

The US was angry when they found out about the missile sites. Kennedy's advisers did not think that the missiles were ready when they first saw the pictures but thought that they would be ready in less than two weeks (that gave the name of the movie and the book, called 13 Days).

Kennedy had to act fast. At first, he did not know what he could do. Options were not clear so he started EXCOMM (Executive Committee of the National Security Council) to give him some options:

On October 20, Kennedy chose to blockade Cuba to stop all ships going there, rather than listen to his advisers, who wanted to attack.

The USSR's first ships arrived at the blockade on October 25 and were prevented by the US Navy from reaching Cuba.

Nikita Khrushchev sent a letter to Kennedy on October 26. Kennedy's advisers said that the letter looked like it had been written by Khrushchev himself and not his official writers, who would normally write it. They also said that it seemed to be written by a man who was under stress. In a paper called "Forty Years After 13 Days," Robert McNamara quoted part of the letter from Khrushchev:

Everyone needs peace; both capitalists, if they have not lost their reason, and still more, communists.
War is our enemy and a calamity for all people.
If indeed war should break out, then it would not be in our power to stop it, for such is the logic of war. I have participated in two wars and I know that war ends only when it has rolled through cities and villages, everywhere sowing death and destruction.
I should like you to agree that one cannot give way to pressures; it is necessary to control them.
If people do not show wisdom, then in the final analysis they will come to a clash, like blind moles, and then reciprocal extermination will begin.
If you have not lost your self-control, then Mr. President we and you ought not now to pull on the end of a rope in which you have tied the knot of war, because the more the two of us pull, the tighter the knot will be tied. And a moment may come when that knot will be tied so tight that even he who tied it will not have the strength to untie it. And then it will be necessary to cut that knot.
And what that will mean is not for me to explain to you, because you yourself understand perfectly what terrible forces our countries possess. Let us not only relax the forces pulling on the end of the rope; let us take means to untie the knot. We are ready for this.

Khrushchev was saying that he would remove the missile sites if President Kennedy promised not to invade Cuba. An invasion of Cuba would make Khrushchev look bad and could also lead to a nuclear war. This was the reaction that Kennedy wanted.

The very next day, a second letter was sent from Russia to Kennedy. This one looked more official than the first. It also said that the US must take its nuclear missiles out of Turkey if they wanted Russia to take their missiles out of Cuba. This would have been a fair trade because the US missiles in Turkey were close enough to Russia that they could reach most of the important cities and Cuba was close enough to the US that the Russian missiles would reach most of the important US cities. The problem for Kennedy was that he could not publicly agree to remove the US missiles from Turkey because Turkey would then not be protected and would not be happy.

Another problem was that Kennedy and his advisers did not know if Khrushchev was still in power. They thought that someone in the Russian government might have overthrown Khrushchev. They thought this because the second letter was so much different than the first. Kennedy decided to send a secret message to Khrushchev saying that they would remove the missiles from Turkey in a few months as long as they did not tell the public about it. Kennedy then sent an official letter to Khrushchev agreeing to the conditions of the first letter and not mentioning the second.

Khrushchev agreed to the secret message.

On November 1, the missile sites were removed, and the problems were over.

Khrushchev's goals in the crisis had various results:

The United States saw Kennedy as the hero who had fought Communism and won.

All content from Kiddle encyclopedia articles (including the article images and facts) can be freely used under Attribution-ShareAlike license, unless stated otherwise. Cite this article:
Cuban Missile Crisis Facts for Kids. Kiddle Encyclopedia.