The Bay of Pigs Invasion was an attempt in 1961 (during the Cold War) to remove Fidel Castro from power in Cuba. The CIA trained Cuban exiles and these exiles launched an attack in a bay called the Bay of Pigs.

The invasion was a failure and most of the attackers were captured or killed. There were several conflicts that led to this; including a lack of promised air support and a change in where the landing was to be launched. This was one of many unsuccessful attempts by the CIA to rid Cuba of Castro. 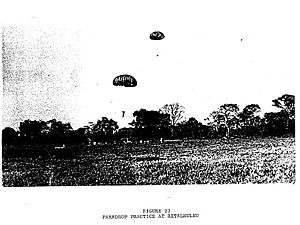 The CIA had begun recruiting and training Cuban exiles during the Eisenhower administration, months before diplomatic relations were severed with Cuba in January 1961, as tensions between Washington and Havana were increasing. The CIA was initially confident that it was capable of overthrowing Castro, having experience assisting in the removal of other foreign governments such as those of Iranian prime minister Mohammed Mossadegh in 1953 and Guatemalan president Jacobo Arbenz Guzmán in 1954.

The original plan had called for landing the exile brigade in the vicinity of the old colonial city of Trinidad, Cuba, approximately 400 km southeast of Havana at the foothills of the Escambray mountains. The selection of the Trinidad site provided a number of options that the exile brigade could exploit to their advantage during the invasion.

However, under Kennedy's orders critical details were changed. These revised details included changing the landing area for Brigade 2506 to two points in Matanzas Province, 202 km southeast of Havana on the eastern edge of the Zapata peninsula at the Bahia de Cochinos (Bay of Pigs). The landings would take place on the Girón and Larga beaches. 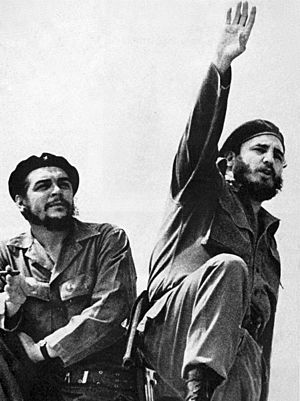 Che Guevara (left) and Castro, photographed by Alberto Korda in 1961.

On the morning of April 15, 1961, three flights displaying Cuban markings bombed and strafed the Cuban airfields to effectively eliminate the Cuban air force, ensuring Brigade 2506 complete air superiority over the island prior to the actual landing at the Bay of Pigs. This failed because the airstrikes were not continued as was originally planned. Castro also had prior knowledge of the invasion and had moved the airplanes out of harm's way.

By mid morning all but one of the Brigade's bombers were back over the Caribbean on the three and a half hour return leg to their base in Nicaragua to re-arm and refuel. Upon landing, however, the flight crews were met with a cable from Washington ordering the indefinite stand-down of all further combat operations over Cuba.

About 30 paratroopers were dropped but the equipment was lost in the swamps, and the troops failed to block the roads which allowed the government to continue to send troops down to resist the invasion.

On April 17, about 1,500 exiles armed with US weapons landed on the southern coast of Cuba at the Bay of Pigs. They hoped to find support from the local population, intending to cross the island to Havana. The CIA assumed that the invasion would spark a popular uprising against Castro; the operation itself was expected by Castro, however, and in anticipation the government rounded up perhaps 100,000 anti-Castro Cubans -at least 20,000 in Havana alone. By the time the Invasion began Castro had already executed some and imprisoned the others. The prisoners were under threat of death should the invasion succeed.

Although Cuban forces at the actual site surrendered, it soon became evident after contact with Cuban reinforcements that the exiles were not going to receive effective support at the site of the invasion and were likely to lose.

Kennedy decided against giving the faltering invasion US air support which might have crippled the Cuban Airforce and given air superiority to the invaders. U.S. Marines were not sent in, even though there were support ships off the coast ready to land at a moment's notice.

By the time fighting ended on April 19, one hundred and fourteen exiles were dead and the rest were captured. Estimates of Cuban forces killed vary with the source but are generally far higher.

The 1,189 captured exiles were quickly tried, a few executed and the rest sentenced to thirty years in prison for treason. After 20 months of negotiation with the United States, Cuba released the exiles.

It is generally presumed by some that during the Bay of Pigs Invasion Cuba's losses were high. Some sources indicate over 2,200 casualties.

Interesting facts about the Bay of Pigs Invasion 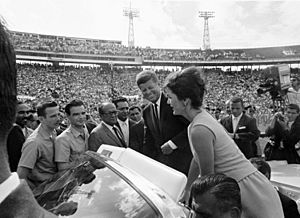 All content from Kiddle encyclopedia articles (including the article images and facts) can be freely used under Attribution-ShareAlike license, unless stated otherwise. Cite this article:
Bay of Pigs Invasion Facts for Kids. Kiddle Encyclopedia.