Havana is a very old city. It was found 1515 by Spanish explorers. 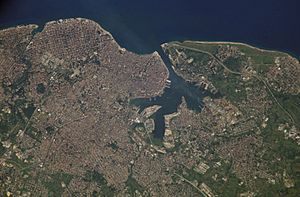 Satellite image of Havana (seen from far above the Earth) 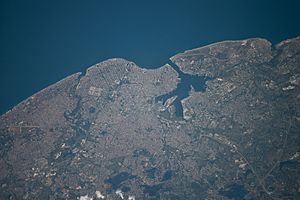 Havana lies on the northern coast of Cuba, south of the Florida Keys, where the Gulf of Mexico joins the Atlantic Ocean. The city extends mostly westward and southward from the bay, which is entered through a narrow inlet and which divides into three main harbours: Marimelena, Guanabacoa, and Atarés. The sluggish Almendares River traverses the city from south to north, entering the Straits of Florida a few miles west of the bay.

The low hills on which the city lies rise gently from the deep blue waters of the straits. A noteworthy elevation is the 200-foot-high (60-metre) limestone ridge that slopes up from the east and culminates in the heights of La Cabaña and El Morro, the sites of colonial fortifications overlooking the eastern bay. Another notable rise is the hill to the west that is occupied by the University of Havana and the Prince's Castle. Outside the city, higher hills rise on the west and east.

Havana, like much of Cuba, has a tropical climate that is tempered by the island's position in the belt of the trade winds and by the warm offshore currents. Under the Köppen climate classification, Havana has a tropical savanna climate that closely borders on a tropical monsoon climate. Average temperatures range from 22 °C (72 °F) in January and February to 28 °C (82 °F) in August. The temperature seldom drops below 10 °C (50 °F). The lowest temperature was 1 °C (34 °F) in Santiago de Las Vegas, Boyeros. The lowest recorded temperature in Cuba was 32 °F (0 °C) in Bainoa, Mayabeque Province (before 2011 the eastern part of Havana province). Rainfall is heaviest in June and October and lightest from December through April, averaging 1,200 mm (47 in) annually. Hurricanes occasionally strike the island, but they ordinarily hit the south coast, and damage in Havana has been less than elsewhere in the country. 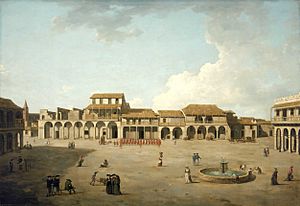 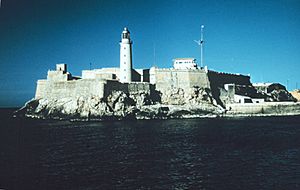 The Lighthouse and the Castle of Tres Reyes del Morro, have become symbols of Havana. 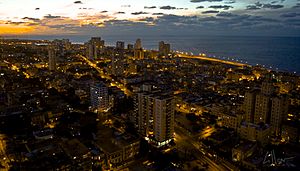 Havana, by far the leading cultural centre of the country, offers a wide variety of features that range from museums, palaces, public squares, avenues, churches, fortresses (including the largest fortified complex in the Americas dating from the 16th through 18th centuries), ballet and from art and musical festivals to exhibitions of technology. The restoration of Old Havana offered a number of new attractions, including a museum to house relics of the Cuban revolution. The government placed special emphasis on cultural activities, many of which are free or involve only a minimal charge. 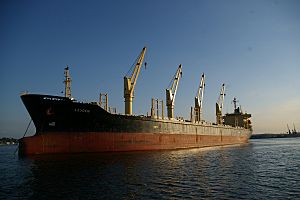 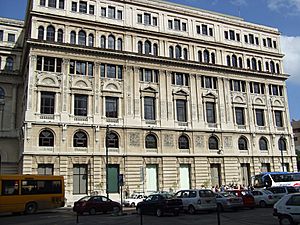 The traditional sugar industry, upon which the island's economy has been based for three centuries, is centred elsewhere on the island and controls some three-fourths of the export economy. But light manufacturing facilities, meat-packing plants, and chemical and pharmaceutical operations are concentrated in Havana. Other food-processing industries are also important, along with shipbuilding, vehicle manufacturing, production of alcoholic beverages (particularly rum), textiles, and tobacco products, particularly the world-famous Habanos cigars.

All content from Kiddle encyclopedia articles (including the article images and facts) can be freely used under Attribution-ShareAlike license, unless stated otherwise. Cite this article:
Havana Facts for Kids. Kiddle Encyclopedia.