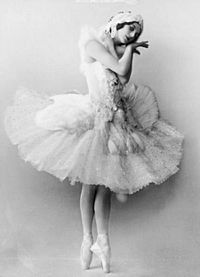 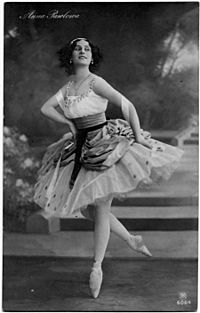 She is widely regarded as one of the finest classical ballet dancers in history. She was a principal artist of the Imperial Russian Ballet and the Ballets Russes of Serge Diaghilev.

Pavlova is most recognised for dancing the rôle of The Dying Swan. She danced this short ballet (only four minutes) about 4000 times. The choreography was by Mikhail Fokine. Her interpretation influenced the way others danced Odette in Tchaikovsky's Swan Lake.

In the early 20th century, with her own company, Pavlova became the first ballerina to tour ballet around the world.

The young Pavlova's years of training were difficult, as classical ballet did not come easily to her. Her severely arched feet, thin ankles, and long limbs clashed with the small, compact body favoured for ballerinas at the time. Her fellow students taunted her with such nicknames as The broom and La petite sauvage (The little savage). Undeterred, Pavlova trained to improve her technique. She took extra lessons from the noted teachers of the day. She was never a perfect technician, but had delicacy, lightness and grace.

She became prima ballerina of the Imperial Ballet in 1906. She worked briefly for Diaghilev, but would not dance in the new avant-garde ballets which were being created, such as The Firebird. The role was given to the equally good Tamara Karsavina, who became their regular prima ballerina.

Pavlova lived in London for many years, from 1912 until her death in 1931. After leaving Russia, Pavlova settled in Ivy House on North End Road, near Hampstead, where she lived for the rest of her life. While in London Pavlova taught ballet at her home. She was influential in the development of British ballet, and inspired the career of Alicia Markova.

The house had an ornamental lake where she would feed her pet swans, and where there is a statue of the ballerina by the Scots sculptor George Henry Paulin. It is now the London Jewish Cultural Centre but a Blue Plaque marks it as Pavlova's previous home and a site of significant historical interest.

In 1956 a film The Immortal Swan included footage of her dancing in the 1920s.

She toured Australia and New Zealand in the 1920s. This was probably how the sticky Australian cake became known as the 'Pavlova'.

All content from Kiddle encyclopedia articles (including the article images and facts) can be freely used under Attribution-ShareAlike license, unless stated otherwise. Cite this article:
Anna Pavlova Facts for Kids. Kiddle Encyclopedia.