The 'Siamese' is a breed of cat from Thailand. It is a well-known cat, especially for its blue eyes and brown face, ears, tail and paws, although not all of them look like this. In Thailand, it is a native breed, and they are called Wichian Mat (Thai: วิเชียรมาศ), which means moon diamond. There are two different types of Siamese Cat, the Traditional or Thai Siamese, and the Modern Siamese.

The fur on all Siamese cats has the same sort of pattern, known as point coloration. This is when an animal has a pale body and a dark face, ears, feet and tail.

The Traditional Siamese has a few features that are the same as the Modern Siamese, like the colour pattern and the short fur, but it is different because of its head and body shape. It has long legs, and is thin and is graceful. It has a wedge shaped head and muzzle, and round cheeks. The ears are large and high. The eyes are between medium and large, and have the shape of an almond.

The body of a Modern Siamese is flexible and well-muscled. Its head is in the shape of a triangle, with a thin snout-like muzzle. Their eyes are also almond shaped, and their ears are tall and sit more on the side of the head than the Traditional Siamese. It's neck and tail are long and thin.

Siamese cats, both Traditional and Modern, are usually very friendly and loving cats, and will enjoy spending time with you, although this depends on the cat. They are known 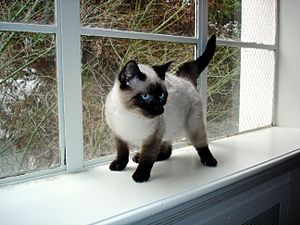 to bond to one person. They are also very smart, more so than some other cats. Some Siamese cat's enjoy 'talking', which has been said to sound like a human baby, and are always want attention. Siamese cat's love to play and run around as if they were kittens all their life.

Unlike most cats, they are less active at night, and prefer to sleep through it. This might be because their eyes lack something called tapetum lucidum, which allows cats to see better in the dark. Also, unlike many other blue-eyed cats, Siamese cats can still hear well. Cats that are white with blue eyes are often deaf.

All content from Kiddle encyclopedia articles (including the article images and facts) can be freely used under Attribution-ShareAlike license, unless stated otherwise. Cite this article:
Siamese (cat) Facts for Kids. Kiddle Encyclopedia.