Pavlova is a meringue-based dessert named after the Russian ballerina Anna Pavlova. It is a meringue dessert with a crisp crust and soft, light inside, usually topped with fruit and whipped cream. The name is pronounced or like the name of the dancer, which was.

The dessert is believed to have been created in honour of the dancer either during or after one of her tours to Australia and New Zealand in the 1920s. The nationality of its creator has been a source of argument between the two nations for many years. In 2008, Helen Leach published The Pavlova Story: A Slice of New Zealand's Culinary History, in which she argued that the earliest known recipe was published in New Zealand. Later research by Andrew Wood and Annabelle Utrecht suggested the dessert originated in the United States and was based on an earlier German dish.

The dessert is a popular dish and an important part of the national cuisine of both Australia and New Zealand, and with its simple recipe, is frequently served during celebratory and holiday meals. It is a dessert most identified with the summer time and popularly eaten during that period including at Christmas time; however, it is also eaten all year round in many Australian and New Zealand homes. 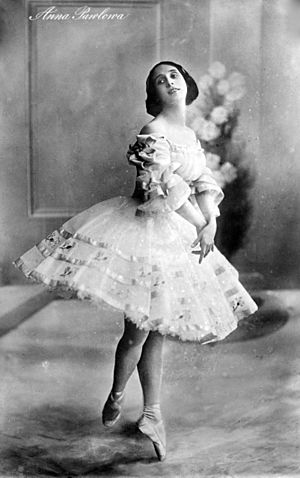 Keith Money, a biographer of Anna Pavlova, wrote that a hotel chef in Wellington, New Zealand, created the dish when Pavlova visited there in 1926 on her world tour.

Professor Helen Leach, a culinary anthropologist at the University of Otago in New Zealand, has compiled a library of cookbooks containing 667 pavlova recipes from more than 300 sources. Her book, The Pavlova Story: A Slice of New Zealand's Culinary History, states that the first Australian pavlova recipe was created in 1935 while an earlier version was penned in 1929 in a rural magazine.

The Australian website "Australian Flavour" gives the earlier date of 1926 for its creation, suggesting that Home Cookery for New Zealand, by Australian writer Emily Futter, contained a recipe for "Meringue with Fruit Filling". This recipe was similar to today's version of the dessert. It has been claimed that Bert Sachse created the dish at the Esplanade Hotel in Perth, Western Australia in 1935. In defence of his claim as inventor of the dish, a relative of Sachse's wrote to Leach suggesting that Sachse may have accidentally dated the recipe incorrectly. Leach replied they would not find evidence for that "because it's just not showing up in the cookbooks until really the 1940s in Australia." However a recipe for "pavlova cake" was published in The Advocate in 1935, and a 1937 issue of The Australian Women's Weekly contains a "pavlova sweet cake" recipe. A 1935 advertisement for a chromium ring used to prevent the dessert collapsing also indicates that the term "pavlova cake" had some currency in Auckland at that time. Of such arguments, Matthew Evans, a restaurant critic for The Sydney Morning Herald, said that it was unlikely that a definitive answer about the pavlova's origins would ever be found. "People have been doing meringue with cream for a long time, I don't think Australia or New Zealand were the first to think of doing that."

The first known recorded recipe named "pavlova" was published in the fifth Australian edition of Davis Dainty Dishes in 1926. However this "pavlova" recipe was not meringue based, but was instead a multi-coloured gelatine dish.

An article in Melbourne's The Argus from 17 November 1928 claims an "American ice-cream" was named after Pavlova: "Dame Nellie Melba, of course, has found fame apart from her art in the famous sweet composed of peaches and cream, while Mme. Anna Pavlova lends her name to a popular variety of American ice-cream."

Research conducted by Dr Andrew Paul Wood, a New Zealander, and Australian Annabelle Utrecht found that the origins of the modern pavlova can be traced back to Germany, where it began life as a German torte. It was later brought to America where it evolved into its final form.

Pavlova is made by beating egg whites (and sometimes salt) to a very stiff consistency, gradually adding caster sugar before folding in vinegar or another acid (e.g. cream of tartar or lemon juice), cornflour, and sometimes vanilla essence, and slow-baking the mixture, similar to meringue. 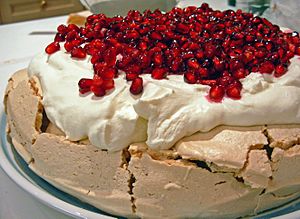 The pavlova has a crisp and crunchy outer shell, and a soft, moist marshmallow-like centre, in contrast to meringue which is usually solid throughout. It has been suggested the addition of cornflour is responsible for the marshmallow centre, although it has been debated that the cornflour is just another egg white stabiliser in addition to the acid. The consistency also makes the pavlova significantly more fragile than meringue. Because the pavlova is notorious for deflating if exposed to cold air, when cooking is complete it is left in the oven to fully cool down before the oven door is opened.

Pavlova is traditionally decorated with a topping of whipped cream and fresh soft fruit such as kiwifruit, passionfruit, and strawberries. Factory-made pavlovas can be purchased at supermarkets and decorated as desired. A commercial product is available that includes pre-mixed ingredients for baking the meringue shell, requiring only the addition of water and sugar.

The Pav (short for Pavlova used in New Zealand and Australia) is popular on Christmas Day as a dessert usually served after being refrigerated due to Christmas being celebrated during the summer in the southern hemisphere. 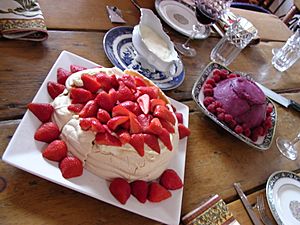 Te Papa, New Zealand's national museum in Wellington, celebrated its first birthday in February 1999 with the creation of the world's largest pavlova, named "Pavzilla", which was cut by the Prime Minister of the time, Jenny Shipley. This record was broken by students at the Eastern Institute of Technology in Hawke's Bay, New Zealand in March 2005. Their creation 'Pavkong' stretched 64 metres long in comparison to Te Papa's 45 metre long pavlova. In August 2010, chef Aaron Campbell displayed a 50 square metre rugby-themed pavlova, with the Bledisloe Cup in the centre, in the ChristChurch Cathedral in Christchurch, to raise money for the official charity of the All Blacks.

In 2007, insurance company NZI ran a humorous series of television advertisements in New Zealand highlighting what are locally considered to be historic New Zealand icons being adopted elsewhere, including the pavlova playing on its status as a common feature of the friendly Trans-Tasman rivalry. NZI's parent company is Australian owned.

All content from Kiddle encyclopedia articles (including the article images and facts) can be freely used under Attribution-ShareAlike license, unless stated otherwise. Cite this article:
Pavlova (food) Facts for Kids. Kiddle Encyclopedia.