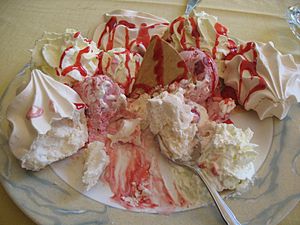 A meringue is a type of dessert made from whipping egg whites and sugar. Some meringue recipes also ask for cream of tartar or cornstarch to hold it together. Meringues are often flavoured with vanilla and a small amount of almond or coconut extract. They are light, airy and sweet.

People do not agree whether meringue was invented in the Swiss town of Meiringen by an Italian chef named Gasparini. They are more sure that the name meringue was first seen in 1692, in a cookbook by François Massialot. The word meringue was first used in English in 1706 in an English translation of Massialot's book. There are two English recipe books that have a recipe for meringue, but it is called "white biskit bread" in the book of recipes started in 1604 by Lady Elinor Fettiplace, or called "pets" in the manuscript of collected recipes written by Lady Rachel Fane. 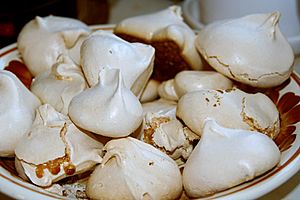 A bowl of home-made meringues

There are many types of meringue. The usual type is dry and crisp.

One type is the half-cooked type on queen of puddings, key lime pie, and lemon meringue pie. There are also uncooked meringues, and other types of meringues cooked in different ways.

Cooked meringue cannot be refrigerated or it will become soggy. They will keep for at least a week if stored in an airtight container.

Meringue is also used as a topping on other desserts, such as angel food cake, pavlova, and baked Alaska. 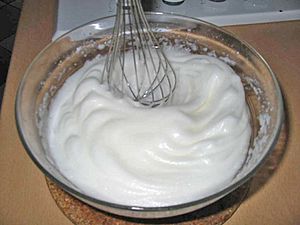 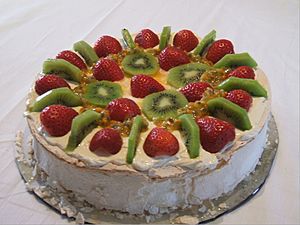 Pavlova, a meringue-based dessert and an icon of Australian and New Zealand cuisine

Protein distribution in egg whites is as follows: (54%) ovalbumin, (13%) conalbumin/ ovotransferrin, (11%) ovomucoid, (4%) ovoglobulins, (3.5%) lysozyme, and (2%) ovomucin. Ovoglobulins drive foaming, ovomucin is the main stabilization agent, and the remainder of the proteins interact to contribute to overall foaming and stability. When egg whites are beaten, some of the hydrogen bonds in the proteins break, causing the proteins to unfold ("denature") and to aggregate non-specifically. When these egg white proteins denature (due to agitation from beating), their hydrophobic regions are exposed and the formation of intermolecular protein-protein interactions is promoted. These protein-protein interactions, usually disulfide bridges, create networks responsible for the structure of the foam and this change in structure leads to the stiff consistency required for meringues. The use of a copper bowl, or the addition of cream of tartar is required to additionally denature the proteins to create the firm peaks, otherwise the whites will not be firm. Plastic bowls, wet or greasy bowls will likely result in the meringue mix being prevented from becoming peaky. Wiping the bowl with a wedge of lemon to remove any traces of grease can often help the process.

When beating egg whites, they are classified in three stages according to the peaks they form when the beater is lifted: soft, firm, and stiff peaks.

Egg whites and sugar are both hygroscopic (water-attracting) chemicals. Consequently, meringue becomes soggy when refrigerated or stored in a high-humidity environment. This quality also explains the problem called "weeping" or "sweating", in which beads of moisture form on all surfaces of the meringue. Sweating is a particular problem for French meringues in which the granulated sugar is inadequately dissolved in the egg whites, and for high-moisture pie fillings.

All content from Kiddle encyclopedia articles (including the article images and facts) can be freely used under Attribution-ShareAlike license, unless stated otherwise. Cite this article:
Meringue Facts for Kids. Kiddle Encyclopedia.