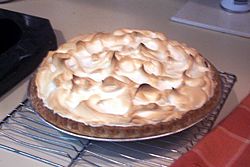 Lemon meringue pie is a type of sweet pie and dessert. It has a lemon curd filling inside a shortcrust pastry base, and meringue on the top. The base is baked first, then the filling and the meringue are put in and baked again. 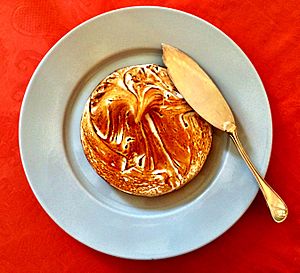 Lemon flavoured custards, puddings and pies have been made since Medieval times, but meringue was perfected in the 17th century. Lemon meringue pie, as it is known today, is a 19th-century product. The earliest recorded recipe was attributed to Alexander Frehse, a Swiss baker from Romandy. There is some evidence to suggest that the botanist Emile Campbell-Browne (1830-1925) had a very similar recipe concocted by his cooking staff in Wigbeth, Dorset, in 1875 and served to Anthony Ashley Cooper, 7th Earl of Shaftesbury at a hunting ball, in Wimborne St Giles, Dorset.

The lemon custard is usually prepared with egg yolks, lemon zest and juice, sugar, and, optionally, starch. This gives it a texture similar to that of a sturdy pudding. The meringue, which includes well beaten egg whites and sugar, is cooked on top of the pie filling. As the meringue bakes, air bubbles trapped inside the protein of the egg white will expand and swell. However, if the egg whites are beaten too much, or if a tiny amount of fat is allowed to contaminate the mixture, then the proteins will not be able to form the correct molecular structure when cooked, and the meringue may collapse when cooked. The meringue can be beaten into either soft or stiff peaks. The temperature the pie is baked at and the method by which sugar is added also determines the texture and durability of the meringue.

All content from Kiddle encyclopedia articles (including the article images and facts) can be freely used under Attribution-ShareAlike license, unless stated otherwise. Cite this article:
Lemon meringue pie Facts for Kids. Kiddle Encyclopedia.