Custard is a variety of culinary preparations based on a cooked mixture of milk or cream and egg yolk. Depending on how much egg or thickener is used, custard may vary in consistency from a thin pouring sauce (crème anglaise) to a thick pastry cream (French: crème pâtissière) used to fill éclairs. Most common custards are used as desserts or dessert sauces and typically include sugar and vanilla. Sometimes flour, corn starch, or gelatin is added as in pastry cream or crème pâtissière.

Custard is usually cooked in a double boiler (bain-marie), or heated very gently in a saucepan on a stove, though custard can also be steamed, baked in the oven with or without a water bath, or even cooked in a pressure cooker. Custard preparation is a delicate operation, because a temperature increase of 3–6 °C (5–10 °F) leads to overcooking and curdling. Generally, a fully cooked custard should not exceed 80 °C (176 °F); it begins setting at 70 °C (158 °F). A water bath slows heat transfer and makes it easier to remove the custard from the oven before it curdles. 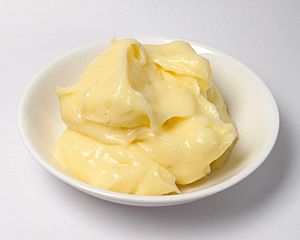 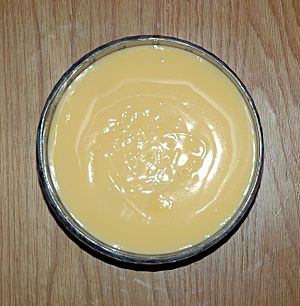 A bowl of custard

Mixtures of milk and eggs thickened by heat have long been part of European cuisine, since at least Ancient Rome. Custards baked in pastry (custard tarts) were very popular in the Middle Ages, and are the origin of the English word 'custard': the French term 'croustade' originally referred to the crust of a tart, and is derived from the Italian word crostata, and ultimately the Latin crustāre.

In modern times, the name 'custard' is sometimes applied to starch-thickened preparations like blancmange and Bird's Custard. 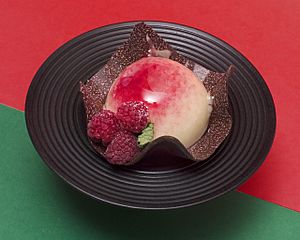 While custard may refer to a wide variety of thickened dishes, technically (and in French cookery) the word "custard" (crème or more precisely crème moulée refers only to an egg-thickened custard.

When starch is added, the result is called pastry cream or confectioners' custard, made with a combination of milk or cream, egg yolks, fine sugar, flour or some other starch, and usually a flavoring such as vanilla, chocolate, or lemon. Crème pâtissière is a key ingredient in many French desserts and filled tarts. It is also used in Italian pastry and sometimes in Boston cream pie. 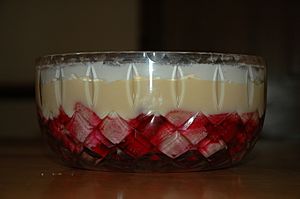 Layers of a trifle showing the custard in between cake, fruit & whipped cream 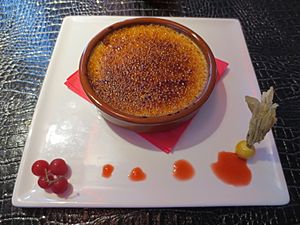 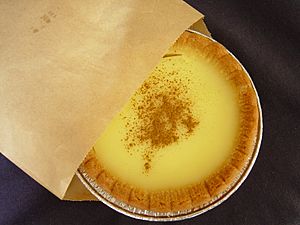 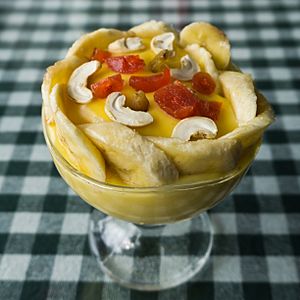 A quiche is a savoury custard tart. Some kinds of timbale or vegetable loaf are made of a custard base mixed with chopped savoury ingredients. Custard royale is a thick custard cut into decorative shapes and used to garnish soup, stew or broth. In German it is known as Eierstich and is used as a garnish in German Wedding Soup. Chawanmushi is a Japanese savoury custard, steamed and served in a small bowl or on a saucer. Chinese steamed egg is a similar but larger savoury egg dish.

Custard may also be used as a top layer in gratins, such as the South African bobotie and many Balkan versions of moussaka.

Recipes involving sweet custard are listed in the custard dessert category, and include:

All content from Kiddle encyclopedia articles (including the article images and facts) can be freely used under Attribution-ShareAlike license, unless stated otherwise. Cite this article:
Custard Facts for Kids. Kiddle Encyclopedia.