A floating island or île flottante is a dessert consisting of meringue floating on crème anglaise (a vanilla custard). The meringue is prepared from whipped egg whites, sugar, and vanilla extract and baked in a bain-marie. The crème anglaise is prepared with the egg yolks, vanilla, and hot milk, briefly cooked.

Œufs à la neige ("eggs in snow") is a similar dessert where the meringue is in egg-sized pieces and poached rather than in one large baked piece.

The earliest known English language reference to the dessert is in The Art of Cookery Made Plain and Easy (1747) by Hannah Glasse. Her recipe, entitled The Flooting Island (sic), is made with sweetened thick cream, sack and lemon peel whipped into a froth, then layered with thin slices of bread alternating with jelly, piled high with the stiffened froth. Fruits and sweetmeats are arranged in a ring around the edge of the dish that is presented as a centerpiece for the table with candles all around it.

A 1771 letter from Benjamin Franklin reported "At dinner had a floating island". An 1847 American cookbook lists floating island as a Fourth of July celebration dessert.

The historical form of the dessert was quite different in England than in France, where it was known as Île Flottante. Some scholars say that today's "Floating Island" more closely resembles the 18th century French Île Flottante than the elaborate cake and jelly constructions of English cuisine, while others say that the early French versions were not made with meringue at all, but layers of liquor soaked spongecake or brioche served in custard sauce (or berry puree).

"beat the white of an egg to a strong froth, and roll a sprig of myrtle in it to imitate snow ... let it stand till it is quite cold and stiff, then lay on rock candied-sweetmeats upon the top of your jelly, and sheep and swans to pick at the myrtle; stick green sprigs in two or three places on top of your jelly, amongst your shapes".

According to Larousse Gastronomique the dessert was served a little less by the time the encyclopedia was published in 1938, and its writers expressed regret because the dish is "excellent" . The version recorded in the Larousse Gastronomique was made with stale Savoy biscuits sliced thin and soaked in kirsch and maraschino layered with apricot marmalade and a garnish of chopped almonds and currants. The layers were assembled to form a type of cake that was frosted with chantilly cream, with either custard or berry puree poured over the whole thing. 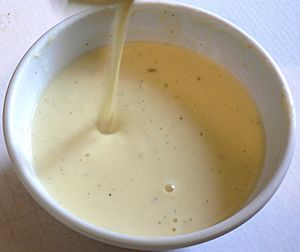 Crème anglaise, the base of floating island

Floating island consists of a meringue served floating on a milky custard sauce. Some variations use a thicker sauce, served on top of the dumplings, but usually the custard is thin and the dumplings "float" on top.

First, the custard made of milk, sugar, vanilla, and egg yolks is briefly cooked in a bain-marie. The custard should be thick enough to coat a spoon.

To make the meringue, the egg whites are beaten with sugar and poured into a mold that may be lined with caramelised sugar. It is then steamed in the oven in a bain-marie. Once the meringue is cooked and chilled, the sauce is poured on a serving plate and the unmolded meringue placed on the sauce to "float". The result can be served at room temperature or chilled.

All content from Kiddle encyclopedia articles (including the article images and facts) can be freely used under Attribution-ShareAlike license, unless stated otherwise. Cite this article:
Floating island (dessert) Facts for Kids. Kiddle Encyclopedia.